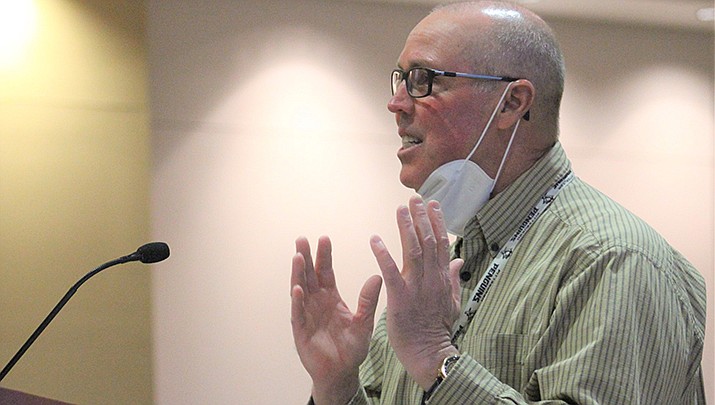 KINGMAN – The Mohave County Board of Supervisors will consider purchasing enough on-demand ballot marking devices to set up current polling sites as vote centers at their meeting at 9:30 a.m. on Monday, April 19 700 W. Beale St.

The supervisors will also consider the purchase of precinct ballot scanners.

“2021 is the right time for Mohave County elections to move forward by holding elections using vote centers versus the current precinct-based polling site model,” the agenda states. “This can be accomplished by purchasing enough additional ballot-on-demand ballot making devices to allow any voter in Mohave County to receive and vote their correct ballot style at any Mohave County voting poll site.”

The county has $341,189 in grant money that can be used to purchase the equipment, with the remaining $84,000 needing to be paid by the county. The agenda also notes there is approximately $500,000 remaining in the Voting Equipment Replacement fund established in 2010.

Supervisors will also consider authorization of a letter supporting specific routes for UniSource Energy Service’s proposed transmission line project in Golden Valley. UniSource is planning a transmission line and substation facilities in the Kingman and north Golden Valley areas, with several alternatives for line siting being explored. District 4 Supervisor Jean Bishop has reached out to the Bureau of Land Management in opposition to the east routes due to potential obstruction of communication towers for local businesses on private property, along with concerns on impact and proximity to residential structures, and the use of BLM land as opposed to private property. Supervisors will be asked to authorize a letter on behalf of the county in support of West Routes 1 and 2, “as they have a minimum impact on residents and private property.”

In other matters, the board may approve an amendment between the Mohave County Department of Public Health’s Senior Programs Division and the Western Arizona Council of Governments Area Agency on Aging to increase the budget by $228,626. The amendment would require a 10% match for all services funded including congregate meals and home-delivered meals, or $86,361.

Supervisors may also approve the use of a cooperative contract for ambulances, EMS and other special-service vehicles for a new ambulance for the Bullhead City Fire District in the amount of $214,324. Grant funds will cover approximately $124,000, with the fire district set to contribute $90,228.

In 2016 supervisors approved utilization of a cooperative contract for Eagleview GIS Digital Imaging Software System and associated services, with two projects being approved at a total cost of $418,168. Payment was set up for a period of six years, with each project seeing three annualized payments. On Monday, supervisors may approve continuation of the contract, in addition to an amendment to the second project that adds $85,459. The amendment would increase flight coverages in some improved areas not previously addressed in order to provide high-resolution imagery.

A certificate of removal and abatement for 11 parcels of personal property, with the total amount to be abated at $2,155, is also on the agenda for possible approval.

Supervisor Travis Lingenfelter of District 1 has placed an item on the agenda asking his counterparts to approve a resolution “declaring the sentiments of Mohave County concerning the ongoing illegal immigration crisis at Arizona’s southern border.”

That resolution would “respectfully urge Gov. Doug Ducey to use all powers at his disposal, including the use of the National Guard, and to take other necessary steps to secure the State of Arizona’s southern border and to stop the dangerous flow of deadly drugs and other contraband, the unprecedented number of unaccompanied children who are at serious risk of child sex trafficking, and illegal aliens with unknown agendas and backgrounds into the United States of America via the State of Arizona’s southern border.”