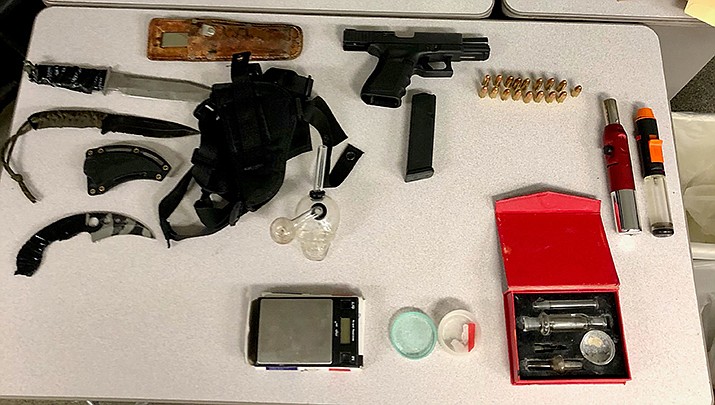 These items were seized during the arrest of two Californians near Topock on April 16. (MSCO photo) 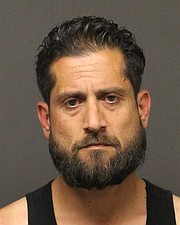 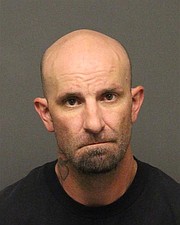 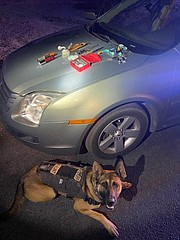 Grimm, a K-9 officer with the Mohave County Sheriff’s Office, poses with the drugs he found in a car on April 16. (MCSO photo)

KINGMAN – Robert Jason Urquiza, 45, and Michael Anthony Rist, 41, both of Riverside, California, were arrested by the Mohave County Sheriff’s Office on Friday, April 16 on suspicion of multiple felony drug and weapons charges.

MCSO wrote in a news release that at approximately 10:45 p.m., deputies conducted a traffic stop on a vehicle in the area of S. Golden Shores Parkway and E. Shore Drive. A records check of the vehicle revealed a suspended registration, according to law enforcement.

Deputies approached the vehicle and observed two male subjects inside. Deputies made a passenger-side approach and contacted the front-seat passenger, identified as Rist. Deputies reportedly smelled the odor of alcohol coming from the passenger and observed a white, crystalized substance in his lap. Rist was then detained.

Deputies then contacted the driver, identified as Urquiza, who notified deputies of a weapon in the vehicle and was detained. K-9 Grimm was requested and performed an outer sniff of the vehicle, and alerted to a positive odor of illegal drugs inside the vehicle.

A search of the vehicle reportedly revealed methamphetamine, a scale, assorted drug paraphernalia, multiple knives and a handgun. MCSO wrote that a records check revealed the weapon to be stolen, while another records check showed both subjects to be prohibited possessors.