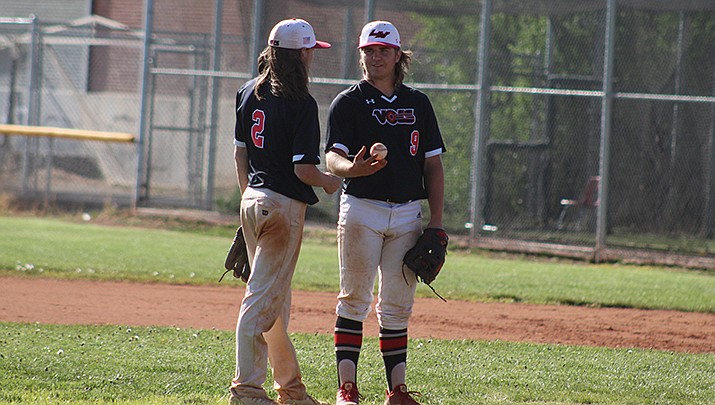 Garrett Diem, right, pitched a four-hitter on Tuesday, April 20 to lead Lee Williams to a 4-1 win over Mohave in a high school baseball game. (Photo by Casey Jones/Kingman Miner)

The senior right-hander struck out 13 batters and walked none to improve to 4-1 on the season with a sparkling 0.96 earned run average.

The Volunteers benefitted from four walks and stole six bases to improve to 7-5 overall. Lee Williams is ranked 18th in the state in Class 4A. Mohave slipped to 3-8.

The teams meet again at 4 p.m. Thursday, April 22 in Kingman.

KINGMAN – Kingman gave the second-ranked team in the state in Class 3A a scare on Tuesday, April 20 before falling 5-1 to the Odyssey Institute in a high school baseball game.

The Minotaurs strung together three hits to take a 2-0 lead in the second and added another in the third. Kingman pushed across a run in the bottom of the third when junior Connor Ocampo reached on a fielder’s choice, stole second and scored on a two-base throwing error. Odyssey Institute added single runs in the sixth and seventh innings to seal the win.

For a full story, see the Friday, April 23 issue of the Kingman Miner.

Lee Williams snapped a four-game losing streak with the win, and improved to 2-12. Mohave fell to 1-11. No other information was available.