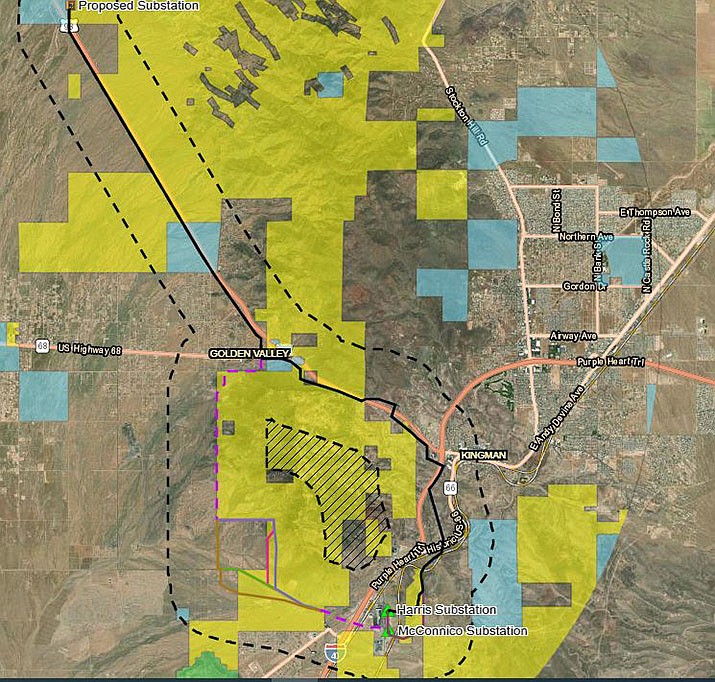 The six routes being considered for the Golden Valley 230kV Transmission Line Project share a common alignment to the north, but split at the southern half of the project with alternatives to the east and west. (Courtesy photo)

At 5:30 p.m. Monday, April 26 Kingman and Golden Valley area residents will have the opportunity to weigh in on UniSource Energy Services’ planned construction of a 230-kilovolt transmission line and substation in Golden Valley aimed at keeping up with projected increases in energy demand over the next decade.

Joseph Barrios, supervisor of Media Relations with UniSource Energy Services, explained the utilities company began looking at the project in 2007 or 2008 in anticipation of increased energy needs for a mining operation in Golden Valley. That operation did not come to fruition.

“But it did prompt us to take a look at our infrastructure and our customers’ expected energy demands,” Barrios said. “In the process of studying the project we realized there was a need just for our existing customers, and how we anticipate energy demands to grow over time, we realized there was a need for new infrastructure.”

UniSource Energy Services projects a 5-35 megawatt increase in peak energy demand over the next decade, with Barrios noting now is the time to take steps to ensure its grid can accommodate that increase.

“Like all system upgrades, the time to think about what will be required is now,” Barrios said. “We never want to be in a position where demand increases but we’ve made no improvements to the grid. We have to look forward and we have to plan and prepare as best we can, and always in a way that balances cost, the environment and public input.”

There are six routes under consideration for the project, all of which begin from the proposed location of the substation off of north U.S. 93 just before Mineral Park Road and across the highway from W. Vista Grande Lane.

“There’s basically two sets of routes,” Barrios said. “They share a common alignment to the north, but then on the southern half of the project there are alternatives to the east and to the west. The preferred route identified during the public outreach process was one of the eastern routes, and there are a couple of reasons for that. We tend to favor routes that utilize existing corridors, utility corridors, because it minimizes disturbance and if there’s an established right-of- way then we can make use of that. And so that was one of the factors in identifying that as the favored route.”

Another factor was public input, with Barrios saying approximately five or six comments favored western routes, while approximately two dozen favored eastern routes. The Mohave County Board of Supervisors on Monday, April 19 unanimously voted to recommend to the Arizona Corporation Commission west routes 1 and 2, “as they have a minimum impact on residents and private property.”

Barrios noted that an environmental assessment indicated there are slightly fewer residences within 100 feet of the eastern routes, but more residential structures within 1,000 feet of those routes.

“Still, if the line is built along a western route, some construction and related disturbances will still occur along the Eastern routes, where aging 69 kilovolt (kV) infrastructure will need to be upgraded,” he said. “If an eastern route is approved, we can upgrade the existing line while building the new transmission line, minimizing disturbances.”

To view the complete layout of all six options which cross both private and federal Bureau of Land Management land, see the map provided on the project’s webpage at https://bit.ly/2QLSRaP.

“Now it will be reviewed by the Arizona Power Plant and Transmission Line Siting Committee, and if they issue a recommendation, if they approve our application, that will go to the Arizona Corporation Commission for review,” Barrios said of the next steps in the process.

That review by the line siting committee will occur at 5:30 p.m. Monday, April 26 at the Hampton Inn & Suites, 1791 Sycamore Ave., in Kingman. The review will include a public comment period to allow local residents the opportunity to weigh in on the project and communicate their preferred routes, questions and concerns.

“If they’ve commented before, we have captured those and we will share those with the line siting committee and the corporation commission,” Barrios said. “They should all feel welcome to submit additional comments, or reiterate their thoughts or concerns.”

For public health reasons, UniSource requests that the public participate via Zoom. For instructions on Zoom participation or how to listen to the meeting without participating, go to https://www.uesaz.com/golden-valley/.

“I always think it’s important for customers to know that when we propose a project like this we don’t do it lightly,” Barrios said. “We’re always looking forward and trying to determine how can we provide the best service possible. When we propose a project like this, we really are considering a number of differing things. First, it’s what we think our customers are going to need in the future in terms of what are their projected energy needs and what type of infrastructure is going to be required to serve that.

“But we also look at proximity to the infrastructure we have in place, the environment, public input is obviously a big part of it,” Barrios continued. “We really are just looking to build a project for our customers that’s required to continue providing that reliable service.”