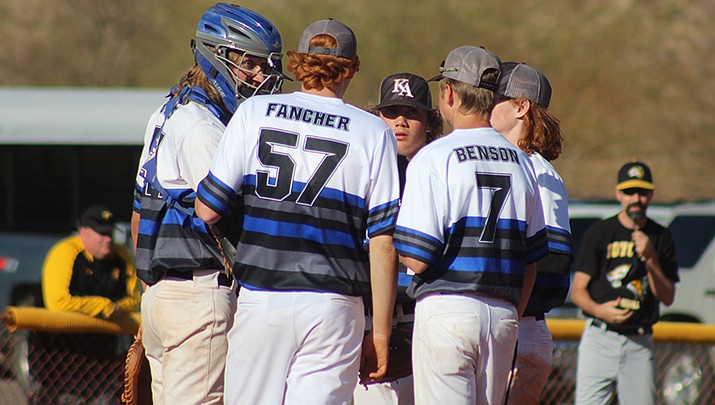 Half of the Tigers’ hits went for extra bases – seven doubles and three triples – as Academy built a 10-1 lead through five innings, then put things away with a nine-run sixth.

Bridges allowed just three three hits and one earned run while walking two. He improved to 2-3 on the mound.

The Tigers also benefitted from eight stolen bases, with Short and Benson swiping two each.

Academy improved to 6-6 on the season, and is ranked 14th in the state in Class 2A. The top 16 teams make the playoffs.

It looked like it was going to be a long day for the Thunderbirds, as Lee Williams jumped on Mohave pitcher River Borland for three hits and two runs in the first frame.

Lee Williams senior Rye Samson reached on a fielder’s choice, and, going on the pitch, scored from first on a double to right-center by junior Ethan Klenke, who then scored on a single to right by Isaacs.

But that was about it for the Lee Williams offense, as the Volunteers managed just three hits and four baserunners the rest of the way.

Mohave narrowed the gap to 2-1 in the top of the second, but Petersen and Isaacs shut them down the rest of the way.

The Lady Tigers scored in every inning to roll to a 23-0 win, amassing 22 hits in the process.

Senior Lynsey Day had an amazing day at the plate, going 5-for-6, as 11 of 12 Academy batters hit safely.

Academy, ranked 10th in the state in Class 2A and in line for a playoff spot with one regular season game remaining, improved to 7-6 overall. The Lady Tigers close the regular season at Arizona Lutheran High School in Phoenix at 4 p.m. Tuesday, April 27.

PHOENIX – The Kingman High School softball team improved to 10-1 on the year with a 14-1 win over Metro Tech on Thursday, April 22.

The Lady Bulldogs built a 6-1 lead through four-innings, then brought the 10-run mercy rule into play with an eight-run fifth inning.

BULLHEAD CITY – Mohave beat Lee Williams 12-7 on Thursday, April 22 in a high school softball game, avenging a 15-14 loss to the Volunteers earlier in the week.

Lee Williams fell to 2-13 on the season with the loss. They were slated to play at River Valley at 2 p.m. on Saturday, April 24, then travel to Prescott to play the Badgers at 4 p.m. Tuesday, April 27.