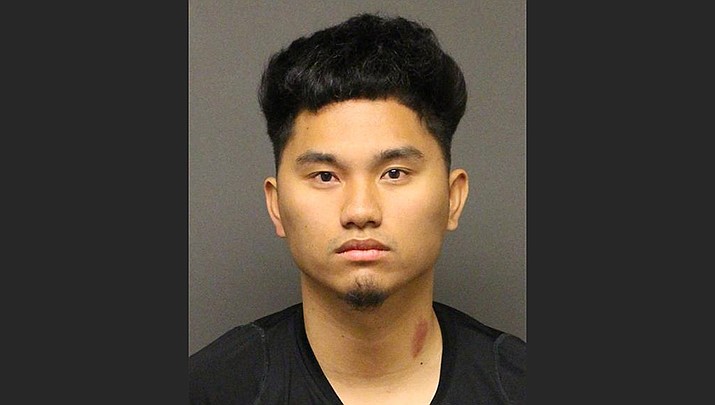 KINGMAN – Marc Bryan Cariaga Mayubay, 20, of Delano, California, was arrested by the Kingman Police Department on Thursday, April 22 on allegations of sexual activity with a 16-year-old Kingman-area girl.

KPD wrote in a news release that at approximately 7:35 a.m., officers responded to a report of suspicious activity in the 800 block of N. 1st Street. A witness had reported seeing two teenagers inside a SUV parked along the road involved in sexual activity.

Officers arrived and determined that Mayubay was involved in sexual activity with a 16-year-old Kingman-area girl. It was also determined, according to KPD, that the victim and Mayubay had connected sometime during the previous weeks by using an internet app called “Monkey.”

Mayubay is alleged to have driven to Kingman that morning, picked up the victim at her bus stop and parked near her school. KPD wrote that Mayubay provided the victim with a new cellphone and a sizeable amount of cash.

Mayubay, who reportedly admitted involvement in the offense, was arrested on suspicion of felony sexual abuse and sexual conduct with a minor. He was booked into the Mohave County Adult Detention Facility.

The victim, who was not injured, was released to her parents.

“Parents need to know that the Monkey app randomly connects teens with other Snapchat users for a 10-second video chat,” KPD wrote. “They can add more time or add the person on Snapchat to continue the connection. The app allows users ages 13 and older, but there is no verification of age. As always, parents are encouraged to monitor their children’s phone and computer activity. Please reported any suspected criminal activity.”