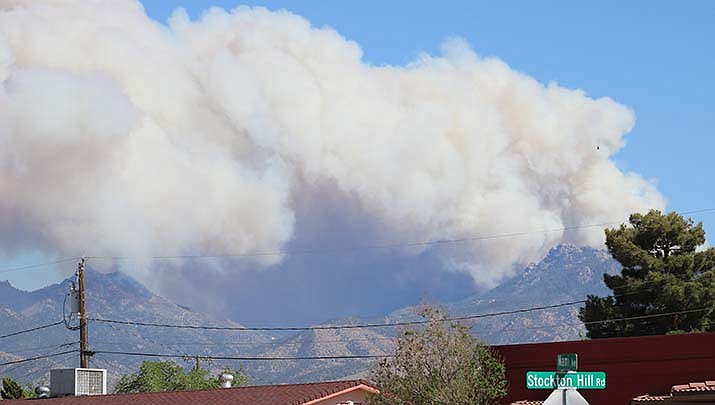 KINGMAN – The Flag Fire in the Hualapai Mountains has grown from 600 to 1,000 acres as of 10 a.m. Monday, April 26, with a helicopter scheduled to do reconnaissance over the fire area this morning.

Mohave County wrote in a news release that the Flag Fire resulted in the evacuation of approximately 200 homes in the Pine Lake community after breaking out at approximately 2 p.m. Sunday afternoon. The fire, which is being fueled by ponderosa pine at higher elevations as well as brush and grass, originated between the Flag Mine and Wild Cow Campground in the Hualapai Mountains. The cause of the fire is still under investigation.

The communities of Atherton Acres and Pinion Pine are currently on SET status for evacuations. That means evacuation orders are imminent for those areas, and their residents should start preparing to evacuate.

Multiple fire units are onsite, the release noted. Those include multiple fire engines, a lead plane, three large air tankers, three single-engine air tankers and several helicopters. The reconnaissance is expected to provide a better assessment of the fire’s acreage.

“Burnout operations have occurred and a number of attack drops have taken place so far despite heavy smoke in the area,” the county wrote.

The Red Cross has a shelter in place for evacuees at Palo Christi Elementary School, 500 Maple St. A command post is set up at the Ranger Station at Hualapai Mountain Park.

Cooler temperatures and higher humidity, which limit fire growth, are expected in the area moving into Tuesday, along with a chance of showers, according to InciWeb.