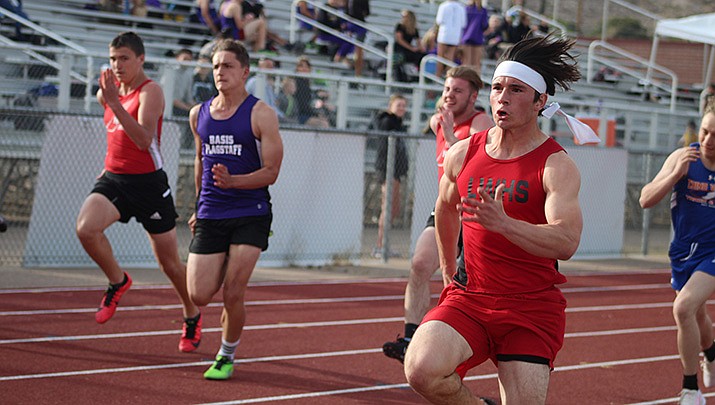 Highland won the meet 160-111 over runner-up Lake Havasu. Lee Williams was third in the 21-team field with 61 points.

Toms won the 200-meter race in 22.51, beating runner-up Jamel Jenkins of Desert Edge High School by .3 seconds while setting a personal record. He was second at 100-meters in 11.30, just .02 behind winner Cody Pellaton of Lake Havasu. Toms also notched a third-place finish in the 400-meter event, crossing in 51.32, also a personal record.

Other top-five finishers for the Volunteers included freshman Wyatt Pickering, who was third in a blanket finish in the 800-meter run in 2:01.91. Less than a half-second separated the top three. Pickering was second in the 1,600-meter run, just over a second off the pace.

Senior Kaiona Bautista placed third in the 300-meter hurdles in 44.06 for the Vols, while senior Zach Allen was fifth in the shot put with a throw of 40-03.00.

In the girls meet, Highland prevailed over North Canyon 158-112. Lee Williams competed, but was unable to score any team points.

Sophomore Arianna Hannan was the top finisher for Lee Williams, placing 13th in the discus with a throw of 73-11.

The Dust Devils plated eight runs in the first inning and six in the second en route to the 4½ inning win. River Valley had 14 hits, including five doubles, a triple and two homers.

Senior Chloe Spitzer held Lee Williams to just one hit, as the Lady Vols fell to 2-14 for the season. They play next at 4 p.m. Tuesday, April 27 at Prescott High School, before hosting Cortez at 3:45 p.m. Wednesday, April 28.