Briefs: Ducey calls for US action on water contamination near bases 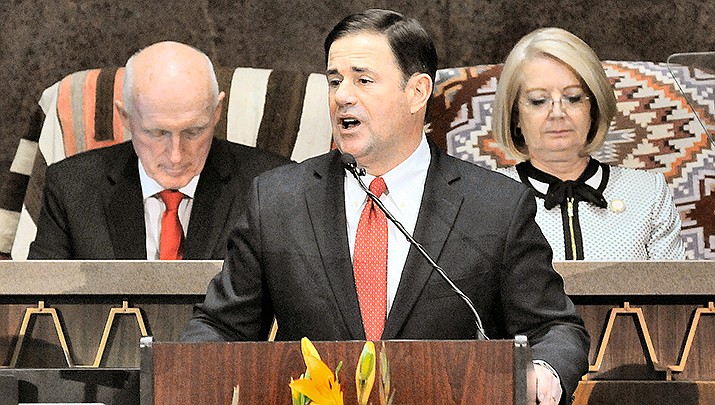 Gov. Doug Ducey is calling on the federal government to identify and treat groundwater contamination near four current and former military air bases in metro Phoenix and Tucson. (File photo by Howard Fischer/For the Miner)

PHOENIX - Gov. Doug Ducey is calling on the federal government to identify and treat groundwater contamination near four current and former military air bases in metro Phoenix and Tucson.

Ducey called for sharing of data and taking other steps to protect public drinking water systems, including stopping spread of underground plumes of contaminants.

“Ensuring that all Arizonans have the cleanest possible drinking water from public water systems today and for our future is critical for our health and well-being and a top priority of our state,” Ducey wrote.

TEMPE - One man is dead and another injured after a shooting at an apartment building near the Arizona State University campus, Tempe police said Wednesday.

Police said they were called about shots being fired around 6:30 p.m. Tuesday.

When officers arrived, they reported seeing a car leaving the scene.

Police pulled the vehicle over and said two men inside the car had gunshot wounds.

One man was pronounced dead at a hospital and the other suffered injuries that don’t appear to be life-threatening, according to police.

The names and ages of the two men haven’t been released yet.

Police said they’re searching for the suspect or suspects involved in the fatal shooting.

PHOENIX – Gov. Doug Ducey has signed a bill allowing a new tax on Arizona Diamondbacks tickets and concessions to pay for stadium improvements.

The legislation signed Wednesday was requested by the Diamondbacks to advance the team’s years-long quest to finance changes to Chase Field in Downtown Phoenix.

The legislation allows for a 9% tax on all sales in the stadium and a hotel the team could build on the property. It also gives the Diamondbacks access to low-interest bonds. Revenue from the sales tax would pay off the bonds.

Critics said during legislative debate that the team should pay for its own stadium investments. But bipartisan majorities in the House and Senate approved HB2835.