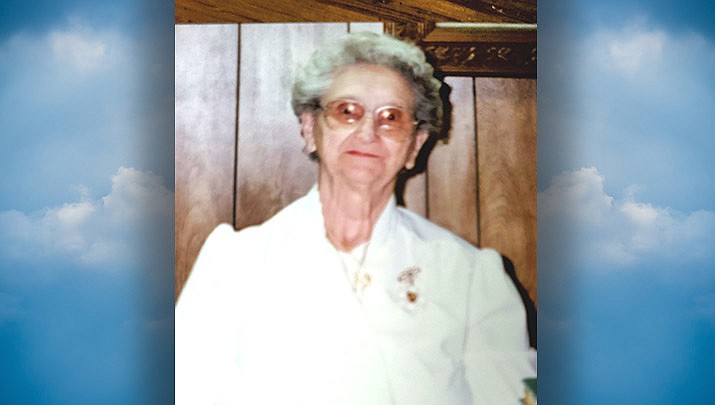 Hulda May (Schroeder) Watson passed away from natural causes on March 6, 2021. Hulda was born Sept. 19, 1922 to Arthur Schroder and Ada May Scherstein in Littleton, Colorado. Hulda is survived by two grandchildren, Beth (Nate) of New Hampshire and James (Sara) from Tucson; along with two great-grandchildren, Santiago and Liam. Preceding Hulda in death were her husband James “Jimmy” Watson; her son Robert “Bob” Watson; Bob’s wife Margaret “Peg”; and sister Eleanor Green of Kingman.

After high school Hulda joined the Navy where she met her husband Jimmy. They were married Oct. 29, 1944 in Denver, Colorado. Hulda resigned the Navy in December 1944. She then served the Airforce in communications as a civilian employee for 25 years. Hulda and Jimmy were both WWII veterans and served proudly. After their discharge they made their home in Denver, Colorado.

Jimmy and Hulda moved to Kingman in the 60s because her sister Eleanor lived here. Hulda was well known for her community service and volunteerism. She attended Grace Lutheran Church and spent many hours sewing quilts and knitting baby hats for newborns at KRMC. She was a 10-year Jubilarian volunteering at St. Vincent de Paul. Hulda was voted Humanitarian of the Year in 2007 and 2008. She also received an award for Women Making History in 2009. Hulda was a KRMC and Hospice volunteer for 35 years. Additionally, she worked with the Bonelli House and KAAP.

As a member of Kingman Rebekah Lodge No. 12, Hulda served in many offices both local and state. Hulda served as Assembly Mother for the International Association in 2018.

Hulda was a friend to all and touched many lives. A Celebration of Life is planned for June 12 at 2 p.m. at the Masonic Temple, 212 N. 4th St., Kingman. If planning to attend, please wear face covering.