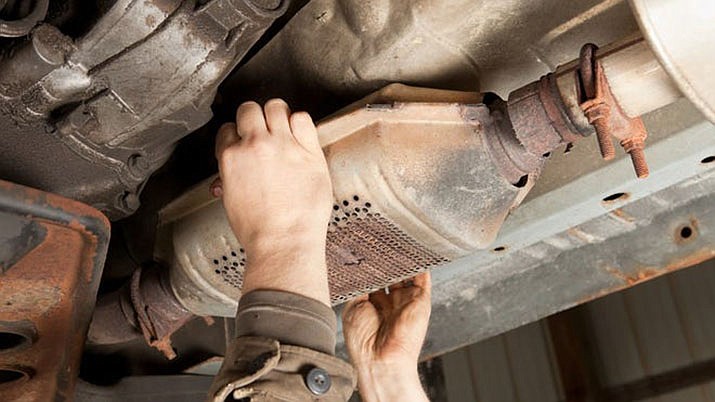 A $1,000 reward is being offered for information leading to the apprehension of those responsible for catalytic converter thefts in Kingman over the past year. (Photo courtesy of KPD)

KINGMAN – “Local thieves” are believed to be responsible for the theft of catalytic converters over the past year in Kingman, and a $1,000 reward is being offered for information leading to the arrest of those responsible.

The Kingman Police Department wrote in a news release that the removal of catalytic converters is “relatively quick and simple for thieves.” A catalytic converter is an exhaust emissions control device installed along the exhaust system, designed to convert toxic gases and other pollutants into less-toxic gas.

“The metals used in the catalytic converter are considered ‘precious metals’ and are valuable to scrap metal dealers,” KPD wrote. “These thieves can lie on the ground, under the vehicle, and cut and remove the converter in a matter of minutes. Vehicle owners are encouraged to park vehicles in well-lit and highly visible areas.”

A $1,000 reward is being offered for information leading to the arrest and apprehension of those responsible. Anyone with information is asked to contact KPD at 928-753-2191, or report anonymously to Mohave Silent Witness at 928-753-1234.