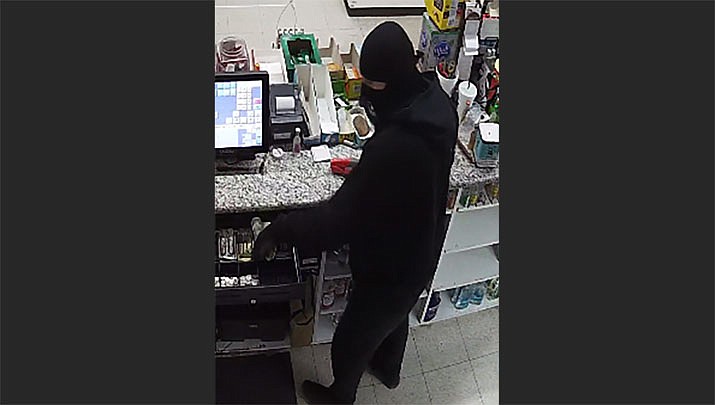 Kingman police are requesting the public’s help in identifying this suspect involved in an armed robbery in Kingman on Friday, Nov. 26. (Photo courtesy of KPD)

KINGMAN – The Kingman Police Department is asking the public to help locate a suspect who robbed a store at gunpoint in the 2100 block of Kingman Avenue at 10 p.m. Friday, Nov. 26.

KPD wrote in a news release that the male suspect was wearing all black and carrying a black bag upon entering the store, pointing a gun and demanding money.

The store employee complied and the suspect took an undisclosed amount of money from the register, which he put into the black bag before leaving the store on foot.

The store was occupied by the employee and one customer at the time of the incident, but no one was injured.

The suspect is described as being approximately 5 feet, 10 inches tall with a slim build. Mohave Silent Witness is offering a $750 reward for information leading to the identification and arrest of those involved.