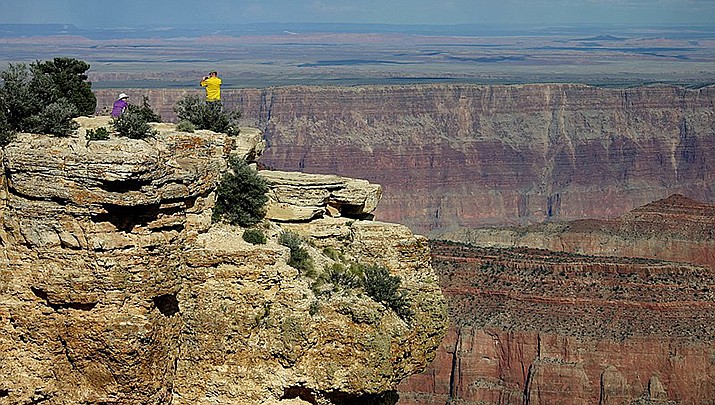 The highway to the North Rim of the Grand Canyon has been closed for the winter season, the Arizona Department of Transportation has announced. (Photo by Roland Arhelger, cc-by-sa-4.0, https://bit.ly/3Ib5qCC)

GRAND CANYON NATIONAL PARK – The highway to the North Rim of the Grand Canyon is barricaded for winter and authorities urge drivers heading into snow country to be cautious, particularly if GPS or navigation apps recommend taking alternative routes.

The Arizona Department of Transportation announced the closure of State Route 67 between Jacob Lake and the North Rim on Wednesday. Several other highways in Arizona's high country will close by Dec. 31 or sooner depending on the weather.

The department advised taking extra clothing, food, water and other emergency supplies if driving in snow areas and cautioned that taking suggested alternate routes that are unpaved and unplowed “can lead you into danger."

In December 2016, a Pennsylvania woman who was a marathon runner hiked 26 miles through backcountry snow to get help after she, her husband and their son got stuck driving on a snowy forest road while trying to reach the North Rim after the highway closed.

Rescuers reached the father and son after the dad was able to climb a ridge and get a cellphone signal. The woman had holed up in a cabin at a closed park entrance and was rescued the next day by rescuers on snowmobiles.

PHOENIX – A day after breaking a 72-year record with 25 November days of 80 degrees Fahrenheit (27 degrees Celsius) or higher, Phoenix has set a mark for the warmest Dec. 1.

The 25 days of temperatures of at least 80 degrees broke Phoenix’s November record of 24 such days, also set in 1949.

Above-average temperatures are expected to continue in Phoenix leading into the official start of winter on Dec. 21.

Officials with the National Oceanic and Atmospheric Administration’s Climate Prediction Center, a division of the National Weather Service, said La Nina climate conditions have emerged for the second consecutive year and that brings drier and warmer winter weather.