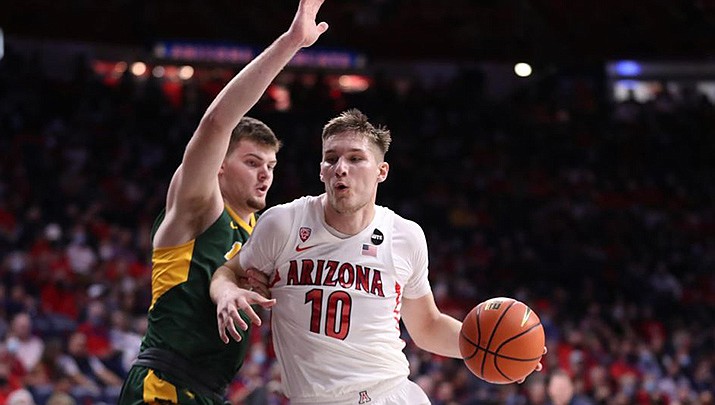 Christian Koloko added 12 points for the Wildcats (7-0, 1-0 Pac-12), who won their fourth straight against the Beavers. Mathurin finished with six rebounds.

“The first thing that really got Benn going was the offensive rebounding. That’s something he and I have been talking about,” Arizona coach Tommy Lloyd said. “Making plays in the effort areas and not just hunting jump shots. Then he hunted some good 3s and our guys found him in that zone.”

Jerod Lucas scored 17 points to lead the Beavers (1-8, 0-2), who haven't won since their opener against Portland State.

Arizona fell behind 13-7 early, responded with a 16-0 run capped by Mathurin's three-point play and steadily pulled away, never relinquishing the lead.

Oregon State got within six points early in the second half, but a layup by Azuolas Tubelis made it 52-41 with 17:13 left and the Beavers didn't get within 10 points the rest of the way.

“I was really excited the way our guys came out ready for fight. And then just seems like what’s cost us against all teams is little spurts in each half,” Oregon State coach Wayne Tinkle said. “We got down in the first half and then battled back. Second half, same thing. We just we couldn’t keep the ball in front. We couldn’t grab a rebound. We turned it over way too much.”

Kerr Kriisa finished with 11 points for Arizona and Tubelis scored 10.

The Beavers were thwarted by turnovers, with 22 that Arizona turned into 27 points.

“I don’t know if I envision stats going into the game, but I definitely knew we wanted to pressure them and force them to make tough plays in tight windows. Our guys did a good job of that," Lloyd said.

Arizona was supposed to open Pac-12 play at home on Thursday against Washington, but the game was postponed because of COVID-19 issues with the Huskies. That game has been rescheduled for Jan. 25.

"We played one game basically in the last two weeks. So maybe it took us a little bit to get our feet underneath us, but I’m really proud of how our bench came in and changed the game, pressuring defensively and making some things happen,” Lloyd said.

The Wildcats are averaging more than 90 points per game under Lloyd, who's in his first season as their coach after 20 years as an assistant at Gonzaga.

Arizona: The Wildcats' No. 11 ranking is their highest since they were No. 9 in January of 2018. ... Arizona has three wins this season by 45 or more points.

Oregon State: The Beavers have not led a game at halftime this season. ... Oregon State has defeated Arizona nine times at Gill Coliseum when the Wildcats have been ranked, most recently on Jan. 12, 2020, when the Beavers beat then-No. 24 Arizona 82-65.

Mathurin, a sophomore, had a career-high 31 points against the Beavers at Gill Coliseum last season.

“To be honest, I’m from Canada and Corvallis is pretty much the same as Canada so I’ll just say it’s the weather,” he joked after the game.