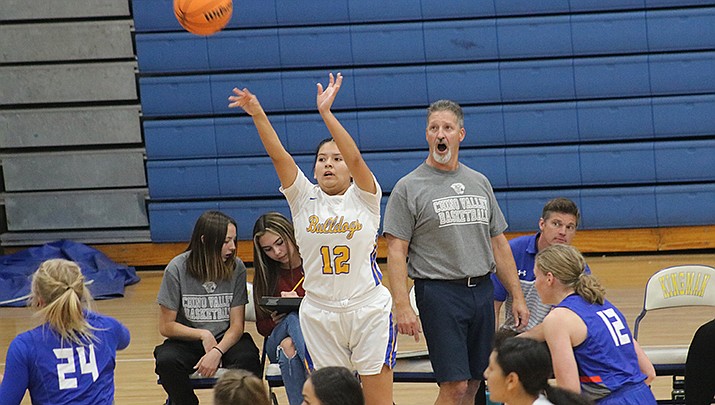 BULLHEAD CITY – The Lee Williams High School girls basketball team dropped a narrow decision to Needles but rebounded for a 60-32 win over Odyssey on Friday, Dec. 3 at the River Valley Girls Basketball Shootout in Bullhead City.

Junior Rebecca Arave scored a game-high 14 points to lead the Lady Volunteers, who held a 16-14 lead at the half, against Needles.

Lee Williams forged a tie with 25 seconds left on steals and layups by sophomore Chelsea Torrey and junior Victoria Gravell, but Needles made some key free throws in the waning moments to forge the win.

Taliyah Crook added 11 points to the Lee Williams attack, all in the second half.

Against Odyssey, Lee Williams jumped out to an early lead and never looked back, leading 30-15 at the half.

"We mixed up our defensive sets going from man-to-man to zone and it seemed to stymie Odyssey. We were able to force multiple turnovers and finish at the rim to take a nice lead in the first half,” Lady Vols head coach Jerry Arave said.

FORT MOHAVE – The Lee Williams High School boys basketball team evened its record at 1-1 with a 49-40 win over homestanding Mohave on Thursday, Dec. 2.

The Vols return to action on Thursday, Dec. 9 at the three-day Pepsi Holiday Tournament at Flagstaff High School.

Primm and Larson had nine rebounds apiece to lead the Bulldogs on the boards.

LAKE HAVASU CITY – The Kingman High School boys soccer team opened their season with a 2-0 win over Parker at the Mohave County Soccer Tournament at Lake Havasu High School, and beat the Broncs again 2-1 in a later round.