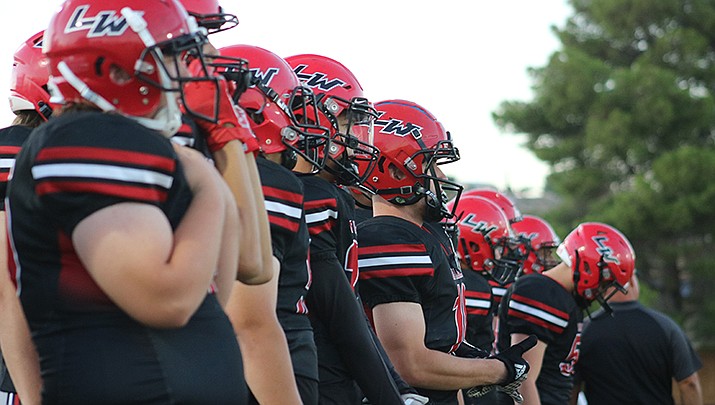 KINGMAN – The athletic talent of Kingman-area youths was on fine display in 2021, from state championships in wrestling and tennis to astounding football, soccer, barrel riding and CrossFit accomplishments, and more.

The Lee Williams High School football squad had its most successful season in years in 2021. Enjoying a winning stretch that started in October, the Volunteers ran with that momentum in securing a playoff berth in November. It was the team’s first playoff appearance since 2014, and its first ever in Class 4A.

The Volunteers also advanced further in the playoffs than ever before, making it to the quarterfinals of the tournament where they met the Mesquite Wildcats, the defending champions of Class 4A. The Vols fell 27-13 to the Wildcats, who again brought home the championship in 2021.

“This year’s group has just been really resilient,” said head coach Patrick O’Boyle, noting the team had starters ranging from freshmen to seniors. “They put in a bunch of time in the offseason and bonded really well with each other.”

O’Boyle said the team’s success resulted from a culmination of a few factors over the course of multiple years, including a run of talented classes and a squad that now knows what it takes to be a winning team.

The Lee Williams football squad was not the only local team to advance to the playoffs in 2021. The Lee Williams Lady Volunteers soccer team won the first playoff game for girls soccer in school history when they outlasted Seton Hill Catholic 1-0 in the opening round of the Class 4A playoffs in March.

“It was the best defensive game I’ve seen the girls play this year. They shut Seton Catholic’s offense down,” said Lee Williams head coach Chris Selby, adding that it was a “total team victory.”

The Lady Vols’ quest for a berth in the semifinals was snubbed by top-ranked Prescott in a 4-1 loss. Lee Williams did score a goal on the top-ranked team, which had surrendered only six goals as of that point in the season.

The boys soccer team from Lee Williams also advanced to the playoffs in 2021. The squad lost 4-1 to Walden Grove High School in the opening round of the Class 4A playoffs in March. It was the third year in a row that the Volunteers made the playoffs.

Payton Wayman of Lee Williams High School was state runner-up in wrestling as a sophomore. He decided to improve upon that marking as a junior, coming away with the 160-pound Arizona High School Division III State Championship in 2021. He did so without losing a single match all season.

“It just kind of happened,” he said. “Sophomore year I wasn’t expecting to get into the finals, and now this year I’m unbeatable. It’s crazy. It’s awesome though.”

Lee Williams head wrestling coach Thomas Jonseck said he had the pleasure of watching Payton and his brothers grow from kids to men as one of the individuals who started the organization 10 years ago.

“In certain sports, you can be the greatest coach in the world, but at the end of the day it comes down to that athlete,” Jonseck said. “And that is what Payton shows every single day, every year, he has grown. He has put in that work, he’s the one who takes those moves and perfects it, makes it his own. All we do is show him the tools and he’s the one who builds himself.”

Wayman wants to pull from his success and help the younger wrestlers at Lee Williams.

Senior Logan Rosenbach and sophomore Kohen Juelfs of Lee Williams High School brought home the Division II state doubles championship in tennis in 2021. And they did so while remaining undefeated.

The pair went 5-0 while cruising to the tournament title, beating Zach Daniels and Jackson Fisher of McClintock High School 6-2, 6-4 in the finals on Monday, May 3 at the Paseo Racquet Center in Glendale.

Rosenbach and Juelfs were near perfect in the regular season, going 10-0 while winning four of their matches 8-0, and four more matches 8-1. They were also the top singles players for the Volunteers, who finished the season 7-3 as a team. Rosenbach was 9-1 at No. 1 singles, while Juelfs was undefeated at 10-0 at No. 2 singles.

Kingman’s Taliyah Bowman Crook won a world title at the 2021 Indian National Finals Rodeo (INFR) in Las Vegas. The title from October showcased her hard work and made her an inspiration for Kingman youth. For the 15-year-old world champion junior barrel racer, barrel racing is not just a hobby, but a family passion.

The teenager trains on her horse, JDM Cinderella, each day and describes her win as the “best feeling ever.” She was the 10th rider to compete at the rodeo, so watching everyone before her was nerve-wracking.

“I had to wait for everyone, and I was literally the fastest time, but the whole time I was just thanking God,” Bowman Crook said with a laugh.

After years of training, she thanks her family and trainer for encouraging her passion. She also said God answered her prayers. Bowman Crook said she never prays to win, but this year's title was something she really wanted.

Prior to competing, she grew up riding horses at her grandpa’s house. She remembers riding and racing horses with her cousins, which sparked her love for riding that would lead her to competitive barrel racing.

“I’d always go over there and just ride, just for fun. I really like it, and I love going fast,” Bowman Crook said.

“It’s all about making memories,” Cydnie Crook, mother, said. “It should be fun and not stressful.”

This year was the first year the gym of 400 gymnasts made it to nationals, bringing pride to the community and the gym owned by Brandee Proffit.

“We came away absolutely thrilled just to be able to medal at all,” Proffit said. “But to have so many girls hit the top three was ... on cloud nine.”

Competing against over 200 teams and over 2,000 athletes across the country, the Kingman girls earned their titles and helped put Kingman on the map.

“It takes a lot of effort,” said Payton Miller. “You have to be dedicated because if you leave and then you want to come back you have to catch up.”

While the sport takes time and effort, the girls learn structure and time management early on. The gym is also open to everyone and celebrates a diverse range of backgrounds and skill levels.

“I love that we have gymnasts of all levels,” Proffit said. “We have all ages from babies through older teens, all shapes, all sizes.”

Along with training and perfecting their skills, the friendships created at the gym motivate and bring joy to the gymnasts.

“Most of my friends are from gymnastics,” Miller said, and Emily Flummer agreed. “We’re here all the time.”

Proffit said it’s important for the girls to have fun while also developing their skills. She said the support the gymnasts receive from one another helps them improve their art.

“We all have different challenges we work through, but that’s what’s exciting about it,” Proffit said. “You can individually push yourself, but it can also be a team.”

Sixteen-year-old Hayleigh Kanthack of Kingman has made CrossFit part of her lifestyle. She trained to make her way to the renowned CrossFit Games, which she attended in Madison, Wisconsin in July.

As a high school student at Kingman Academy of Learning High School, Kanthack also juggles work and trains around four hours five days a week. Even though her main focus is on vigorous workouts preparing her for competitions, she enjoys the community that she’s built at her gym, State 48 Fitness.

“Everybody’s a huge family, especially here,” Kanthack said. “Everybody’s always gonna push you and make sure you’ve got what you need.”

While training brings an abundance of new obstacles, Kanthack said her hip impingement and various other injuries created new hurdles. However, Kanthack recovered and learned how to take care of her body through training and nutrition.

Kanthack said she can struggle to believe in herself and her capabilities since she doesn’t brag about her accomplishments, even though she understands she's an inspiration to young athletes in the area. In her opinion, being cocky gives off the wrong persona.

“I don’t like people who brag or are cocky with me,” Kanthack said. “It’s good to be confident, but confident and cocky are completely different.”

“I’ve already made it this year. I can make it next year,” Kanthack said.