Are we honestly alone? 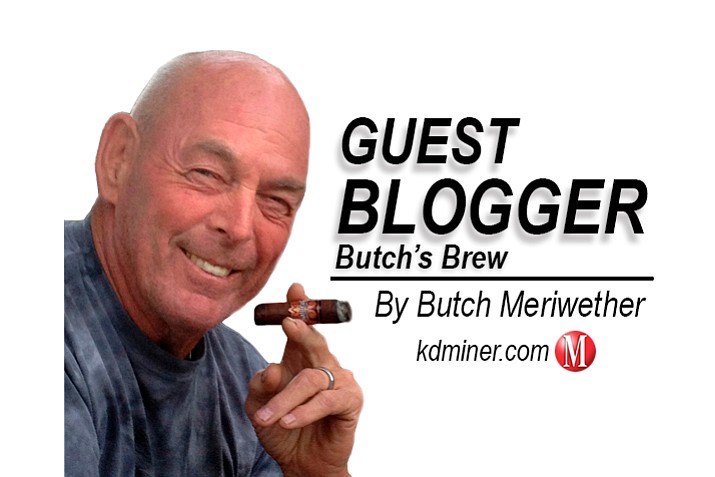 My wife Chris and I were watching a TV program recently called "Aliens - The Definitive Guide," and it got me thinking.

I don't know about you, but there have been times when I feel as if someone is watching me or I sense a presence of someone or something near me that I can't see. There have also been times where some ghostly figures have appeared, I couldn't explain.

Before I jump headfirst into the subject I am about to embark upon, I can just hear the theologians, scientists and hardcore believers of the various religions of the world saying I must be a nut job for broaching the subject.

No, I didn't consume any alcohol beverages, smoke any "funny stuff" and/or chew on some peyote before I decided to write about what has been haunting me for a very long time.

Darn, I have to admit there have even been times when I even heard voices in my head. Yep, people might be now saying Butch is cuckoo, loony, has a few screws loose or is "off his rocker." Well, I'm not, and maybe the voices in my head were some advanced beings communicating with me.

Let me start by saying I'm just as sane as the next person. Oh, that's another subject that may become a future blog or article - sanity and what is its true meaning. Oscar Levant (1906 - 1972), an American actor, pianist and composer, once wrote, "There is a fine line between genius and insanity. I have erased this line."

I remember once a friend and I were traveling through an isolated portion of the Southern California desert during a very dark and starless night when we spotted a bright light on the horizon. As we watched, the light moved extremely quickly through the sky, stopped for a brief period of time only about a quarter of a mile from us, and hovered about 1,000 feet above the ground. A bluish-green light emitted from underneath it and shined down onto the desert floor. What I’ll refer to as an UFO, suddenly began moving extremely fast away from our location and then made a 90-degree turn, disappearing over the horizon. I would estimate the craft was traveling more than a couple thousand miles per hour when it made the 90-degree turn. I have to tell you that there's no aircraft currently that I know of with that capability. The G-force of the turn would have killed the pilot and torn the aircraft apart.

Here is something I guess I should ask everyone: Do you honestly believe we are alone in the universe?

If most everyone believes Heaven and Earth was created by God, then I should ask why they are so arrogant to think God created this vast space called the universe and only placed us in it. As Mr. Spock of Star Trek fame would say, "Once you have eliminated the impossible, whatever remains, however improbable, must be the truth." I say we are not alone.

There are those who also question who God is. Some have hinted that God may actually be a being, an extraterrestrial from another planet, and we on Earth are just experiments - failed or otherwise.

Others have indicated they think beings from another planet are keeping an eye on us to ensure we won't screw up the universe.

Here is another novel idea; maybe Earth is just a dropping off point for those socially unacceptable beings or criminals the extraterrestrials no longer want on their planet. Maybe Earth is actually a giant penal colony on what was an uninhabited planet and was established as an underdeveloped portion of the Universe, to detain "cast outs."

Maybe God or an extraterrestrial established Earth to be like Australia was when England shipped criminals and riffraff to that large body of land. Possibly God or extraterrestrials believed in the theory "out of sight, out of mind" and decided Earth was a great place to deposit those unwanted beings. It would surely explain a lot of the behavior of people on Earth.

No, I am not speaking blasphemy, but I am attempting to insert another point of view some haven't thought of, debated or refuse to discuss.

I don't know about you, but I honestly believe there are others (call them what you want) residing in the universe or beyond and they may even be living among us and observing us.

If there are extraterrestrials on our planet or floating above Earth in their advanced "cloaked" spacecraft, they're probably saying, "Why should we make contact now with these creatures? They are killing each other. We must wait until they become less barbaric."

These aliens may even take on the appearance of human beings and could be the Smith and/or the Jones families living right next to you. OK, I understand the people living next to you don't have a spaceship parked in the garage, but you might want to digest this idea. They could use teleportation as their form of transportation to and from their stealth spacecraft, besides them using that 1953 Rambler station wagon to drive to and from their work and the grocery store.

Are we failed extraterrestrial experiments? Are we a giant penal colony and this is why human beings were originally brought to Earth? Was it a divine intervention and we all came from Adam and Eve? Is Darwin's theory of evolution by natural selection through the discipline of population genetics the true reason we ended up on Earth? I have and continue to contemplate the various ideas and concepts as to how we came to be on Earth.

Archaeologists have discovered prehistoric petroglyphs throughout the world that they believe are cave drawing depictions of ancient aliens visiting Earth and of spacecraft. I guess non-believers and skeptics can't say the petroglyphs are modern-day graffiti by someone who had nothing better to do, since many of them were found in caves inhabited by ancient people.

Hey, I can also think of numerous other premonitions, thoughts of déjà vu and/or unexplained possible extraterrestrial instances that I've experienced over the years, but I don't believe I need to attempt reinforcing what I've been saying and believe.

The U.S. government continually attempts to debunk stories of UFO sightings and crashes for whatever reason. Are they afraid they will cause mass hysteria if they admit there are extraterrestrials visiting Earth on a normal basis? Another idea or thought is they (our government officials) don't want us to know about extraterrestrials because they (some politicians) are not actually of this world. That would be another explanation for the lack of a "birth certificate." I believe most intelligent people know we are not alone.

Roswell, N.M. is a prime example of the government's continued plausible deniability of UFOs. However, facts and eyewitness accounts have recently surfaced from military personnel who were in Roswell during 1947, saying there were actually two crash sites - the original one in early 1947 and the second a short time later in which they believe the extraterrestrials returned to Earth in another UFO for a recovery mission to retrieve the bodies of the "spacemen" from the original crash.

In 1997 and also this year, dozens of people saw lights in a V-formation over Phoenix, a mystery that was captured on videotape and spurred calls for a government investigation. The original explanation by the government for the lights in 1997 was military flares, but it has now been learned the military was not participating in any training that night.

Even former President Jimmy Carter reported to have seen a UFO in Leary, Ga., in October 1969. "It was the darndest thing I've ever seen," Carter said before becoming president. "It was big, it was very bright, it changed colors and it was about the size of the moon. We watched it for ten minutes, but none of us could figure out what it was. One thing's for sure, I'll never make fun of people who say they've seen unidentified objects in the sky."

There is even Mohave County folklore that a UFO either crashed or landed north of Kingman in 1953. All I can say is the Brownie box cameras were around then, but no one seems to have taken a photograph of the alleged UFO sighting or crash site. I know I always have my Nikon camera equipment with me just in case I catch sight of a UFO or happen upon a UFO crash.

Just about everyone has seen what they believe are ghosts, UFOs or some other strange thing that occurred or has happened to them at one point in their life. Was its God, a Guardian Angel or some being not of Earth? I don't think anyone can actually put a finger on it; we'll just have to accept it for what it is - an unexplained occurrence until such time we actually have scientific proof.

What I can't comprehend is why do most human beings believe we are the superior race when every cat, dog and other pet/family members from a loving home are spoiled and we wait on them hand and paw? Maybe we were put on Earth to serve the masters, but overall, we aren't doing a very good job of it. Look how we are destroying the Earth's precious resources.

Maybe the reason extraterrestrials haven't contacted us is because people like me wouldn't let them get a word in edgewise or continually interrupt them. But that's the topic for another blog.