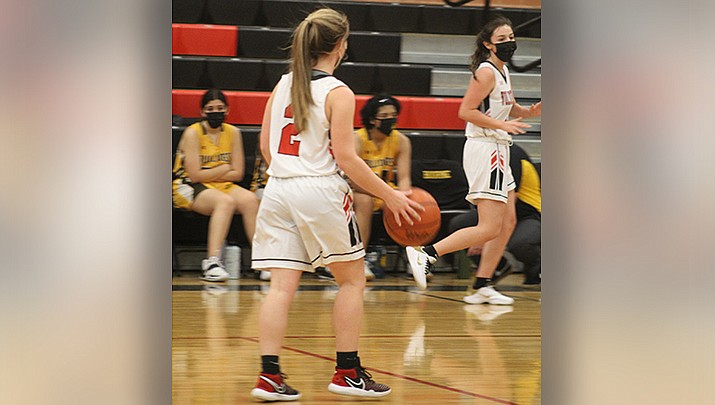 Point guard LaNae Burgess brings the ball up the court for Lee Williams, which lost by three points to visiting Coconino on Thursday, Feb. 4. (Photo by Casey Jones/Kingman Miner)

KINGMAN – The Lee Williams High School girls basketball team dropped a narrow 42-39 decision to the visiting Coconino Panthers on Thursday, Feb. 4, but rebounded with a 51-48 win over Bradshaw Mountain on Friday, Feb. 5..

Against Coconino, LWHS was held scoreless until the last two minutes of the first quarter as Coconino went on a 15-0 run.

The Lady Vols went into lock-down mode in the second quarter, forcing 11 Coconino turnovers and holding the Lady Panthers to just 4 points to cut the deficit to seven points at the half.

In the third quarter Volunteers seniors Savannah Jimenez and Lia Lucero scored 10 of the team’s 12 points, while senior LeNae Burgess registered three of her game-high seven steals and helped to hold Coconino to just eight points, cutting the Panthers lead to 27-24.

"Defense has always been our key to success. We were able to get back into the game because our defense was able to turn steals into points,” Lee Williams coach Jerry Arave said.

In the fourth quarter the Lady Volunteers stepped up their inside game and fed sophomore forward Becca Arave, who scored nine of her team-high 16 points in the quarter including a three-pointer from the corner to give LWHS the lead with just over four minutes to play.

Coconino (3-1) took a three-point lead with just under a minute to play but Lucero hit two free-throws to cut the lead to one. The Panthers then went into a stall and LW was forced to foul.

"We knew they were going to kill the ball and we tried to first force a turnover. When that didn't happen we were forced to foul and Coconino hit their free-throws,” Arave said.

The Lady Vols missed a three-pointer at buzzer.

"I am very proud of how we played tonight. We could have just thrown in the towel when we fell behind 15-2, but our seniors would not let us quit,” Arave said. “This team thrives on the grind. All I ask my players is to give themselves an opportunity to win. We did that tonight. We just fell one basket short."

KINGMAN – Kingman Academy put just 23 points on the board at home on Friday, Feb. 5, falling to undefeated Arizona Lutheran (6-0) 52-23 in a girls basketball game.

The Bulldogs (0-2) had been shut out in their two prior games. They host Bourgade Catholic at 4 p.m. on Friday, Feb. 5.

The Tigers return to action on Tuesday, Feb. 9 at Trivium Prep. Tipoff is at 7 p.m.