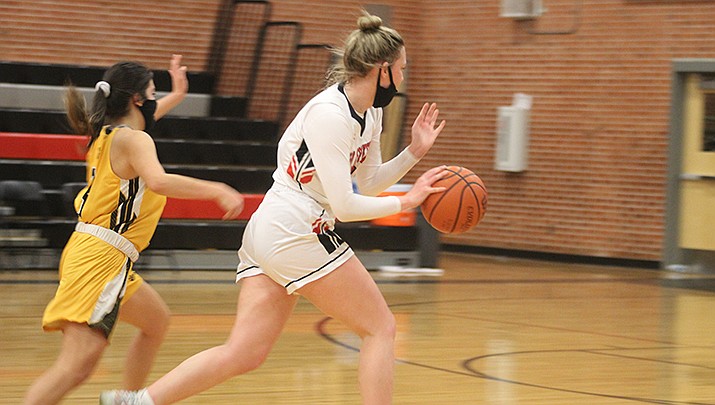 PRESCOTT VALLEY – Playing for a second straight night, the Lee Williams High School girls basketball team traveled to Bradshaw Mountain and hung on for a 51-48 win in double overtime on Friday, Feb. 5.

Lee Williams was able to jump out to an early first-quarter lead behind senior Savannah Jimenez, who made four consecutive free throws to give Lee Williams an 8-5 lead.

The game turned into a defensive battle in the second quarter, but two late three-pointers by Bradshaw Mountain helped cut the Lee Williams lead to 16-14 at the half.

Lee Williams sophomore forward Becca Arave scored seven of her game-high 14 points in the third quarter as the teams headed into the fourth quarter tied 28-28.

Free throws became the story in the fourth quarter as the Lady Volunteers were able to make 5-of-6.

"Our seniors really stepped up late in the game and hit some vital 1-and-1 free throws that kept us close," Volunteers coach Jerry Arave said.

A missed three-pointer by Lee Williams at the end of the quarter sent the game into overtime, and Jimenez hit a deep three to start the first overtime and followed with two free throws. Bradshaw Mountain cashed in late to tie the game and send it to a second overtime.

Free throws became very important in the final overtime as each team made just one field goal apiece. Becca Arave’s steal and bucket gave the Lady Vols a two-point lead and LaNae Burgess sealed the game with one of her four free throws in overtime to give Lee Williams a 51-48 win.

Prescott improved to 4-1 with its fourth straight win. The Volunteers slipped to 2-5 overall.

KINGMAN – Visiting Coconino High School outscored Lee Williams in every quarter to earn a 59-30 win over the Volunteers in a boys basketball game on Saturday, Feb. 6.

The Volunteers were to host Mingus Union at 7 p.m. Tuesday, Feb. 9.