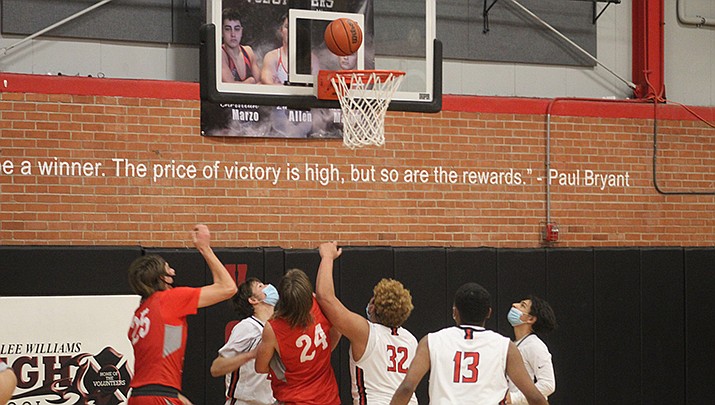 Players from Lee Williams and Mingus Union high schools position themselves for a rebound during a boys basketball game on Tuesday, Feb. 9 in Kingman. Lee Williams won 51-46. (Photo by Casey Jones/Kingman Miner)

The Volunteers got a game-high 17 points from senior Marcell Thompson and 12 from senior Sean Satoafaiga to post their third win against five losses and break a four-game losing streak.

Coach Cain Atkinson’s Volunteers used a 7-0 run at the end of the first quarter to build an 18-9 lead they would never relinquish, as Thompson poured in nine points in the stanza and 15 in the first half. Satoafaiga scored five his 12 points in the decisive fourth quarter.

Mingus Union pulled with three points midway through the fourth quarter, but Thompson scored with 1:17 left to play and senior guard Wes Shafer hit both ends of a 1-and-1 to seal the win with eight seconds remaining.

Mingus Union fell to 1-6 on the season with a fourth consecutive loss. The Volunteers return to action at Greenway High School at 4 p.m. on Friday, Feb. 12.

The Tigers slipped to 3-5 on the season, while Trivium Prep improved to 5-1.

KINGMAN – The first commandment of basketball is “thou shalt make free throws.” The players on the Lee Williams High School girls basketball team are strict adherents to the rule.

The Volunteers poured in 12 straight free throws in the fourth quarter on Tuesday, Feb. 9 to defeat visiting Mingus Union 62-44 on Tuesday.

Senior guard LaNae Burgess went 6-for-6 from the line down the stretch to help key the win, scoring all eight of her points in the second half.

The Volunteers improved to 4-2 with the win, while the Marauders slipped to 1-7. Lee Williams returns to action on Saturday, Feb. 13 at 4 p.m. at Lake Havasu High School.

The Lady Tigers improved to 4-4 on the season with win, and snapped a two-game losing skein. Trivium Prep slipped to 1-3 for the season.