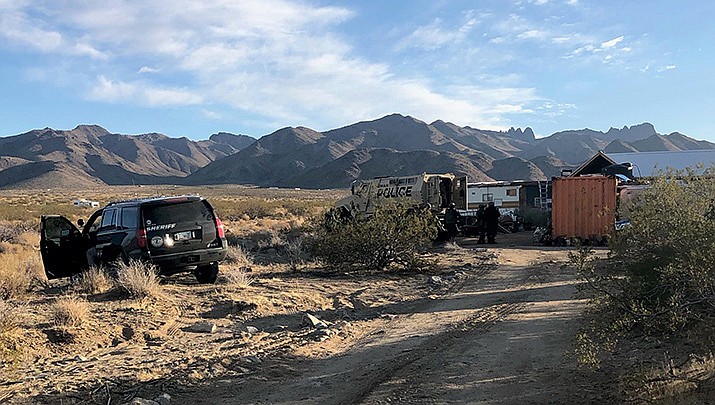 This is the scene where a Dolan Springs man reportedly fired at Mohave County Sheriff’s deputies before shooting himself. (MCSO photo)

KINGMAN – The Mohave County Sheriff’s Office is investigating a domestic violence/weapons offense that occurred in Dolan Springs on Friday, Feb. 12, and that reportedly resulted in a male subject shooting himself to death.

MCSO wrote in a news release that at approximately 3:54 a.m., dispatch received a call of a domestic violence situation in progress and responded to a residence in the area of N. Jasper Drive and W. Seventh Street.

The male subject reportedly began shooting at responding deputies, and SWAT was activated.

Upon arrival of SWAT, multiple announcements were made for the male subject to exit the residence, however, the commands went unanswered. SWAT entered and located the male subject deceased from an apparent self-inflicted gunshot wound, according to the sheriff’s office.

The name of the dead man has not been released. The investigation is ongoing.