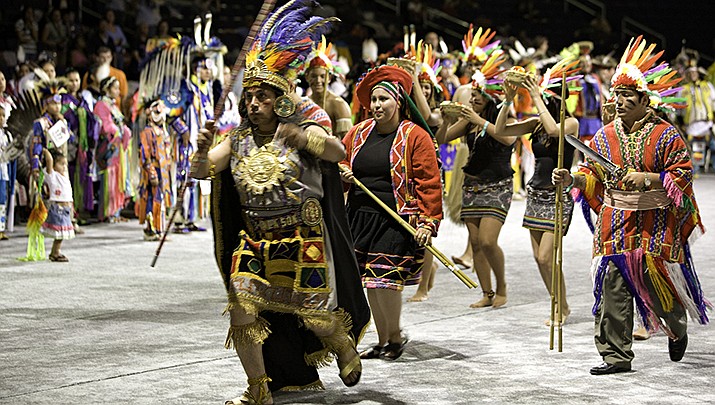 The world’s largest powwow – the Gathering of Nations Powwow – has been been canceled for 2021 due to the coronavirus pandemic. (Smithsonian Institution photo, https://bit.ly/3rX2pgk)

ALBUQUERQUE, N.M. – The world’s largest powwow has been canceled for a second consecutive year because of the pandemic.

The Albuquerque Journal reported Monday that the Gathering of Nations Powwow, typically held in Albuquerque, will be entirely online.

Gathering of Nations founder Derek Mathews says they can't hold the live event until the state opens up for large gatherings. He was told that the powwow won't likely be possible until April of 2022.

He also says it wouldn't be right to risk people's safety, especially considering how COVID-19 has devastated tribal communities.

Normally in the spring a string of powwows hosted by Native American tribes and universities would be underway across the U.S., with tribal members honoring and showcasing their cultures through dancing and singing in traditional regalia.

In 2019, the Gathering of Nations Powwow drew around 91,000 people from across the U.S., Canada and Mexico. It also led to an economic impact of $22 million for Albuquerque.

The virtual powwow will be held April 23-24 with dance performances and competitions livestreamed from various places.

TUCSON – The University of Arizona will join six other schools to help digitize the oral histories of Native Americans collected during the 1960s and 1970s.

The Arizona Daily Star reported that the project aims to make the histories more accessible to Native communities, tribal colleges and the public.

The universities will use a $1.35 million grant from the Doris Duke Charitable Foundation to translate and index the recordings. The foundation says the recordings and materials span 150 Indigenous cultures and include more than 6,500 recordings of people reflecting on their traditions and experiences living on reservations and attending Native American schools.

The University of Arizona’s Arizona State Museum is the storehouse for more than 800 recordings made between 1938 and 1987 focusing primarily on peoples living in the Southwest U.S. and northern Mexico.

The latest numbers released Monday bring the total number of cases on the vast reservation that covers parts of Arizona, New Mexico and Utah to 29,283 since the pandemic began. There have been 1,112 deaths reported related to COVID-19.

Navajo Nation President Jonathan Nez said in a statement that even those who have been fully vaccinated need to continue taking precautions to avoid spreading the virus. He also commended health care workers for helping to get people vaccinated, especially when compared to the rate in areas surrounding the Navajo Nation.

The tribe has a nightly curfew in place from 9 p.m. to 5 a.m. to limit the spread of the virus.

Tribal officials said more than 15,760 people have recovered from COVID-19 on the reservation and nearly 240,000 tests have been administered.

PHOENIX - Police have identified a 17-year-old boy as the person killed during a weekend shooting at the Desert Sky Mall in west Phoenix.

Phoenix police on Monday said Alejandro Martinez was pronounced dead at a hospital and an unidentified 20-year-old man was hospitalized with serious injuries but expected to survive.

Police spokesman Sgt. Andy Williams says the two were shot at about 1 p.m. Sunday inside the mall after getting in an argument over merchandise with an employee who was working at a kiosk. One of the shooting victims pulled out a handgun and the employee shot them.

Williams says the employee is cooperating with investigators as they try to determine exactly what happened and has not been arrested.