Ducey off the hook over phone call 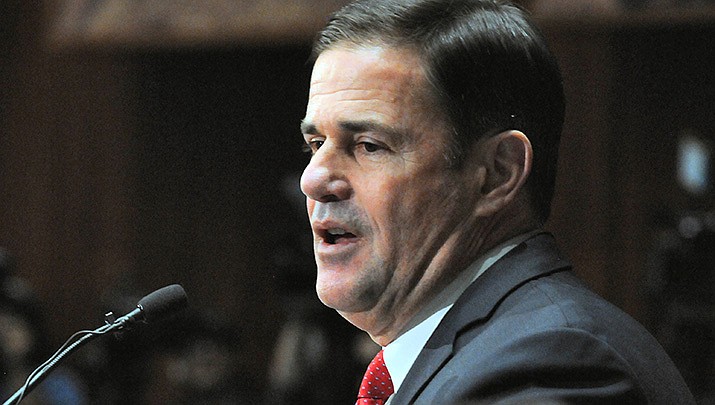 The Arizona Attorney Generals’ Office “will not pursue” claims that a phone call by Gov. Doug Ducey to lobby against Prop. 208 violated laws which prohibit the use of a public resource to influence an election. (File photo by Howard Fischer/For the Miner)

But Gov. Doug Ducey's is apparently off the legal hook over comments he made in a phone call from his office to business owners and managers urging that they try to defeat Proposition 208.

Michael Catlett, the state's deputy solicitor general, said there is no question that Ducey, in a conference call in September with some members of the business community, argued that the 3.5% surcharge on incomes above $250,000 for individuals and $500,000 for married couples filing jointly to help fund public education would be "a small business killer.”

In the same conversation from his office, the governor argued that the dollars raised "won't get to the classroom and they won't benefit our teachers.” And he encouraged those on the call to "go directly to the (web) site” of foes of Proposition 208 and "please help spread the word.”

But Catlett, responding to a complaint filed by the attorney for the pro-208 Invest in Education Committee, said the governor did not violate laws which prohibit the use of public resource to influence an election. And he said the attorney general's office will not pursue the matter.

It starts, Catlett said, with another section of that same law which says it does not deny the civil and political liberties guaranteed in the state and federal constitution. That, he said, entitles Ducey to speak on any "matter of public concern.”

Catlett also said it's irrelevant that the governor made his statements during a work day.

He said the only relevant consideration is whether he used "public resources.” And Catlett said the use of the state's phone equipment is "incidental.”

Finally, he noted that this was not a call the governor was making specifically to stir up opposition to the initiative.

"Here, the (Invest in Education) Committee has not alleged that the topic of the governor's conference call – the state of business in Arizona – was improper,” Catlett wrote.

"The committee has submitted no evidence that the state expended additional resources because the governor responded to a question from a constituent about his view on a matter of public concern,” he continued. "Thus, it appears that whatever public resources were expended because of that response would have been expended regardless of whether the governor was communicating about a ballot measure.”

Despite Ducey's opposition, voters approved the measure by a 51.75% margin.

Since that time, business groups that tried to keep it off the ballot in the first place have filed a new lawsuit arguing constitutional and legal infirmities. But Maricopa County Superior Court Judge John Hannah Jr. has so far rebuffed legal efforts to keep the levy from taking effect.