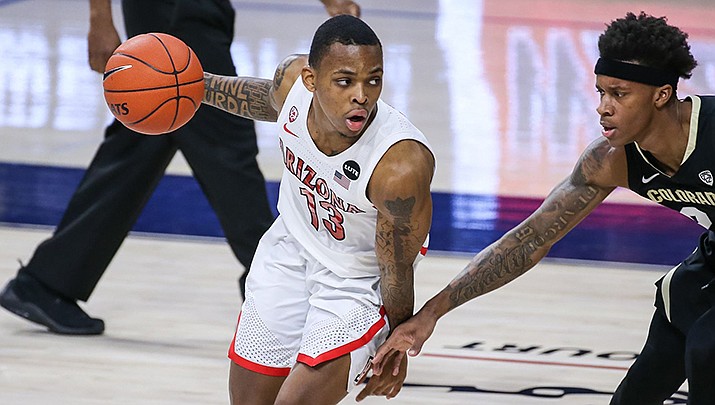 LOS ANGELES - Jaime Jaquez Jr. scored a career-high 25 points on his 20th birthday and UCLA overwhelmed Arizona to start the second half before pulling away to a 74-60 victory on Thursday night.

“I was determined to make it a really happy birthday," Jaquez said. “These are must-win games and that’s the attitude we took into the game. We're getting into crunch time.”

“Their offense just overwhelmed our defense,” Wildcats coach Sean Miller said. “We could not stop them. In the second half, they just wore us down.”

UCLA made 9 of 10 shots to start the second half and take a 49-39 lead. The Bruins outscored the Wildcats 19-8, getting six points each from Jaquez and Riley. Arizona missed six of its first nine shots.

The Bruins shot 73% from the floor in the second half, making 19 of 26 shots. The Wildcats committed 16 turnovers that led to 18 points for UCLA.

“The key was the start of the second half, our defensive intensity,” UCLA coach Mick Cronin said. “We talked about taking them out of their comfort zone.”

The Wildcats got to 55-50 on a pair of free throws by Tubelis, who soon picked up his third foul.

Campbell made a 3-pointer and Jaquez Jr. ran off nine straight points, capped by a 3-pointer that pushed UCLA's lead to 67-54. Johnny Juzang followed with a 3-pointer.

The Wildcats led 31-30 at halftime after being up by eight points. They were limited to one basket over the final 6:59 while getting outscored 10-4 during the Bruins' first extended run of the game.

UCLA trailed most of the half until taking its first lead at 28-27 on a jumper by Jaquez Jr., who had four straight points in the Bruins' late spurt. The teams traded one-point leads the rest of the half.

Arizona: Miller is sitting on 299 wins, which ranks third in school history. The Wildcats came in leading the Pac-12 with 76.2 points, but were held well under that. They are mired in the middle of the league standings with just three games left in their season since the school self-imposed a postseason ban that will keep the Wildcats out of the Pac-12 Tournament and any other postseason event. “They're an awfully young team and it's hard for young teams to play 40 minutes,” Cronin said. “That's what Sean's been fighting through with them all season.”

UCLA: The Bruins need every win they can get in their four scheduled remaining games if they hope to overtake rival USC atop the Pac-12 standings. “We’re in a must-win situation here with our resume, the way our league is being disrespected," Cronin said. “We're trying to make sure we get into March Madness.”

Jaquez Jr. was looking forward to taking on his teammates in the video game Super Smash Bros.

Arizona: Visits No. 17 USC on Saturday.