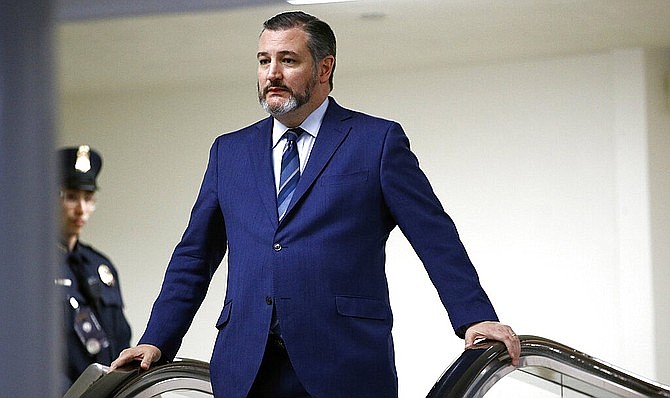 U.S. Sen. Ted Cruz (R-Texas) is being criticized for traveling to Cancun, Mexico to escape the cold during a deep freeze and power outages across Texas. (AP file photo)

WASHINGTON – Ted Cruz's political career already featured many surprise twists before a jaunt to Mexico this week brought him a new level of notoriety.

The Texas senator was once the biggest threat to Donald Trump capturing the 2016 presidential nomination. During a particularly bitter stretch of that year's Republican primary, Cruz called Trump a “coward” and “pathological liar.” By last month, however, Cruz was one of Trump's staunchest allies and a leader in the former president's baseless attempt to overturn the November election.

Such shifts are intended to keep Cruz in a strong position with the GOP base if he runs for the White House again in 2024. But they've also turned him into one of Washington's most villainized figures, someone willing to take any politically convenient position if it keeps his future ambitions alive.

Cruz is under further attack for traveling to Cancun while his constituents suffered through a deadly winter storm that left hundreds of thousands without power and running water. His explanation – that his daughters pushed for the getaway because they were out of school – was particularly panned.

The optics of the trip are hardly ideal. But the question is whether, three years before he faces voters again, the political fallout will last.

“Ted Cruz is feeling the first post-Trump controversy,” said New Hampshire-based Republican strategist Mike Biundo. “I don’t think anybody knows exactly what will happen in this new reality that we’re living in.”

Before Trump got to Washington, scandals, lies and sometimes even simple but major gaffes wrecked political careers.

Once Trump was in the White House, his outlandish antics attracted so much attention that something that simply looked bad, like a senator's leaving on vacation while his state was suffering, wouldn't receive much notice.

Cruz is now navigating how much damage control is needed in a post-Trump political landscape.

He rushed home on Thursday and told reporters the trip was “obviously a mistake.” But he made no public appearances on Friday, and his office didn't answer questions about his schedule or what he was doing to help Texans cope with the storm. His office simply released a statement backing Gov. Greg Abbott's request for federal assistance.

Still, Cruz is still the best-known leader in the country's largest red state, with a far higher national profile than Abbott, who has also been mentioned as a possible 2024 presidential contender, and Sen. John Cornyn, who coasted to reelection last year by a more comfortable margin than Cruz, who narrowly edged Democrat Beto O'Rourke in 2018.

Alice Stewart, a GOP strategist and veteran of Cruz’s presidential campaign, noted that the senator has years before he'll have to run for reelection or president or both in 2024. That's a lot of time to put the Cancun trip "in the rearview mirror,” even if Cruz's political opponents will continue to trumpet it.

“People have come to tolerate a lot more during and after the era of Trump," said Stewart, who noted that while social media often intensifies political scandals, it also tends to shorten their lifespans.

Rick Tyler also worked for Cruz's 2016 campaign but has frequently criticized the senator for kowtowing to Trump since then. He said that “when Texas was down and out and embarrassed, frankly," Cruz's trip to the beach was unforgivable: "There's no way this is going to be forgotten.”

“Cruz is very beatable,” Tyler said of the senator's reelection prospects, especially if he tries again for the White House the same year. “He's got to decide. By doing one or the other, you risk losing both.”

Of course, Cruz has effectively used being one of Washington's most detested figures to his advantage in the past. He came to Congress as a conservative insurgent who infuriated both parties – even prompting fellow Republican Sen. Lindsey Graham of South Carolina to once joke that no senator would convict one of their own for murdering Cruz in the chamber.

In 2016, Cruz won the Iowa caucuses and proved to have a solid national base of support, setting up a tense primary fight that would last for months. At one point, Trump attacked the looks of Cruz's wife and baselessly suggested that his father had a hand in the assassination of John F. Kennedy. Cruz lashed out at Trump in response and was later booed off the stage at that year's Republican National Convention for failing to endorse the New Yorker.

But in the four years since, Cruz transformed into one of Trump's biggest champions in Congress.

Among those close to Cruz, there is a sense that the senator hurt himself politically this week but that he remains well positioned for another White House bid should he opt to run again. His team believes Cruz is the most popular prospective 2024 candidate not named Trump among likely Republican primary voters.

Cruz was a fundraising force for his Republican colleagues in the House and Senate leading up to November's election. And his own fundraising has surged in the months since – including after he stood against the certification of President Joe Biden’s victory in early January. His small-dollar donor base, in particular, which was large to begin with, has grown dramatically, aides say.

Even amid calls for Cruz to resign for his role in helping encourage Trump supporters who staged a deadly insurrection at the U.S. Capitol, Republicans in San Antonio organized a rally celebrating him as “courageous.”

Cruz is also planning to attend next week's influential Conservative Political Action Conference, where he can further ingratiate himself with the GOP's most fervent activists, who aren't likely to hold Cancun against him.

Cruz allies note that the second-place finisher in the previous Republican primary often becomes the nominee in the next election. But moving forward, there is a sense internally that Cruz’s political strength is directly linked to his relationship with Trump, whose feelings are difficult to gauge.

Regina Thomson, a former Cruz loyalist who fought Trump’s nomination at the 2016 GOP convention, has since warmed to Trump. She said that Cruz's Cancun trip didn't bother her, but that ultimately, she and other conservative activists would likely follow Trump’s lead.

“If you would ask a lot of (Cruz’s former) grassroots supporters today, they’d say Trump did such a good job they’d like him to run again," Thomson said. “And if Trump doesn’t run, I think a lot of people will look to him to see who he’s supporting.”