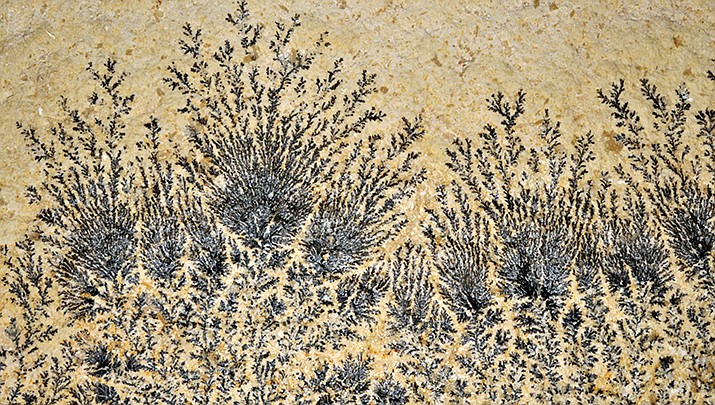 Sitting on my back patio, I was lamenting the cracks in the concrete when it dawned on me that there are very few rocks on earth that I’ve seen that don’t have cracks or fractures of one kind or another. Commonly, rocks are subjected to stresses that form cracks. Unlike faults where one side moves in relation to the other side, fractures are merely a crack without movement.

The cracks in my patio appear to be random but just like cracks in nature, they are caused and controlled by a stress field. The stress field, in turn, is produced by geologic phenomena such as faulting, folding, or cooling that puts stress on a particular formation. These stress fields can and do change, depending on the underlying causes.

As hot objects cool, they contract. A lava flow that erupted on the surface can start at a temperature of over 2,000 degrees Fahrenheit. If it has low viscosity, it can flow over a large area and can reach 100’s of feet thick. As it cools, it begins to contract, placing strain on the lava flow. Heat is lost faster from the top and bottom of the flow, so the flow forms fractures that are perpendicular to the top and bottom (vertical). Because the contracting is going on over the entire flow, the fracturing forms hexagonal columns to efficiently relieve stress throughout the entire flow. The result of this fracturing is called columnar jointing.

As you look out over the prominent buttes of the Peach Springs Tuff northeast from the Beale Spring Hiking trail parking lot, notice that there’s a bed that has prominent vertical fracturing, forming columns. If you look at the tops of these columns, you’ll see a hexagonal pattern to the columns. The fractures will stop at the top and at the bottom of that particular unit. The units above and below have horizontal features that might look like fractures but these are bedding planes, where one bed was laid down on top of another.

Irregular columnar jointing is common but there’re places where examples can be found of almost perfect columnar jointing such as at Devil’s Post Pile, California, Devil’s Tower, Wyoming and at many of the old lava flows I visited in Iceland. At an upscale housing development in St. George, Utah, they use hexagonal basalt columns with a hole drilled through the center of the column as the fountain in water features - very classy.

In granites, the stress was all around so the fracturing caused by cooling contraction is in spherical patterns forming an “onion-like” look to the rocks that is accentuated by spheroidal weathering. There are great examples of this north of town on Stockton Hill Road near milepost 10 and in the Boulder Springs mining district behind Nucor Steel. Some of the hills behind Nucor with spheroidal weathering of the stress cracks look like monkey bread.

Fracturing can also be caused by placing stress on one side of a formation and holding the other side steady. In the Mogollon Rim country of Arizona, the sedimentary rocks were folded and faulted, putting stress and causing fractures. The fractures are aligned in such a way that they relieved the stress. If a bed was being folded, the fractures are parallel to the axis of the fold. The “fins” on some of the great four-wheel roads near Moab, Utah, were formed by this type of fracture pattern. The fracture allowed water to seep in and erode the rock while the rock between the fractures remained as a fin. It’s exciting to drive on the fins, looking down both sides of a narrow trail.

If fractures were formed by an intrusive rock that pushed its way up and brought mineralization, the fractures might be mineralized with gold or copper. If the fracture allowed water to seep in with dissolved manganese, the fracture surface will have manganese dendrites - black staining in the shape of fern leaves that are commonly mistaken for fossil ferns. I don’t know how many times I’ve seen mislabeled rocks at museums and rock exhibits where fractures coated with dendrites were labeled as fossils.

Many times, the stresses that caused fracturing in rocks were caused by continent-sized pressure and a particular fracture orientation can be found over large areas. In Mohave County, the most common fracture direction of this type is in a northwest direction, perpendicular to the direction the continents were moving at the time.

Areas where there’s little to no fractures are highly sought after for building material such as for the counter tops seen in many kitchens- granite, marble or gneiss. The west-wing addition to the Arizona Capital is faced with granite from the Harcuvar Mountains of south-central Arizona, one of the few granite plutons in Arizona that are not highly fractured.

All I was doing was sitting in my patio looking at the cracks and cussing out the cement contractor but as you can see, I digressed into something way too deep.