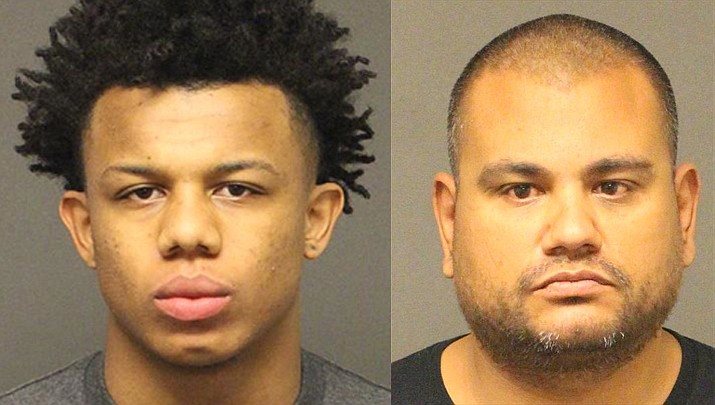 Marc A. Hightower and John A. Williams (MCSO photo)

KINGMAN – John A. Williams, 38, and Marc A. Hightower, 18, both of Kingman, along with a 16-year-old female, were arrested by the Kingman Police Department on Sunday, Feb. 21, with law enforcement still on the hunt for the last remaining suspect in an alleged armed robbery incident.

KPD wrote in a news release that at approximately 7:30 a.m., officers responded to a residence where the victim reported being robbed by three adult male subjects while walking near a convenience store in the 3400 block of E. Andy Devine Ave.

The 32-year-old victim said he was walking along Airway Avenue when the three male subjects exited a parked SUV and quickly approached him. One of the subjects reportedly demanded that the victim hand over his cellphone and wallet or he would be shot. The victim advised that he saw something in the subject’s waistband that appeared to be a handgun.

The victim gave his cellphone and wallet to the subjects, at which time they were reported to have gotten back into the SUV and left. KPD wrote officers were able to corroborate the victim’s statements with video surveillance.

Through the course of the investigation, officers located the suspect vehicle and two of the male subjects, Williams and Hightower, as well as a 16-year-old female who was determined to have been the driver.

The third male suspect is described as a Black, adult male with thin build in his 20s, wearing dark colored clothing and a hoody. Anyone with information is asked to contact KPD at 928-753-2191 or report anonymously to Mohave Silent Witness at 928-753-1234.