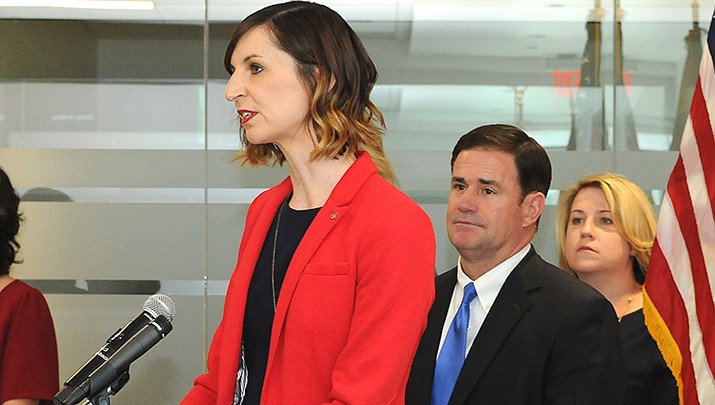 The Chandler Unified School District in suburban Phoenix has opted to return to class virtually after the holidays, following a suggestion made by state Superintendent of Public Instruction Kathy Hoffman, left. (File photo by Howard Fischer/For the Miner)

PHOENIX - A major suburban school districts in metro Phoenix put off plans to reopen schools for in-person instruction this week amid the surge of COVID-19 cases in Arizona.

Before Monday night’s vote by Chandler Unified’s board, the district had planned to resume regular in-person instruction after the winter holidays but met with opposition from teachers and some parents.

The board voted to keep students in online instruction until Jan. 19, the day after the Martin Luther King holiday.

“This option allows for a quarantine period after returning from winter break where students have travelled and participated in gatherings,” the district said on its website,

The district said Tuesday would be a teacher workday to prepare for online instruction that would resume Wednesday.

Gov. Doug Ducey on Saturday rejected state Superintendent of Public Instruction Kathy Hoffman’s call for him to order a two-week “quarantine period” that would keep schools statewide in online learning unless they had waivers from public health officials.

Suspect accused of fatal stabbing in small town of Guadalupe

GUADALUPE – A suspect has been arrested in the fatal stabbing of a man in the small town of Guadalupe, authorities said Monday. Maricopa County Sheriff’s officials said 22-year-old Isaiah Lapre is jailed on suspicion of first-degree murder and tampering with evidence.

The sheriff's office provides law enforcement for Guadalupe and deputies were called to the scene last Saturday afternoon on reports of a stabbing. They found the victim lying on the sidewalk with a neck wound and he was pronounced dead at the scene by responding paramedics.

Authorities reportedly located Lapre and say he had blood on his right hand and was taken into custody for questioning.

Court documents show surveillance video from a nearby business captured the stabbing and the suspect seemed to match Lapre’s physical appearance. Detectives said Lapre told them he didn’t know the victim, who started the confrontation.

Police arrest Peoria man in connection with a fatal shooting

PEORIA – A suspect has been arrested in connection with a fatal weekend shooting in Peoria, police said Monday.

They said 19-year-old David Sanchez of Peoria was taken into custody after officers responded to reports of an argument outside a home Sunday morning.

Police said a 19-year-old man was found shot and lying on a street and he was declared dead at the scene.

Witnesses told police that the shooting appeared to involve two people who knew each other, but a motive isn’t immediately known. Police said enough evidence was gathered to arrest Sanchez, who is jailed on suspicion of first-degree murder.