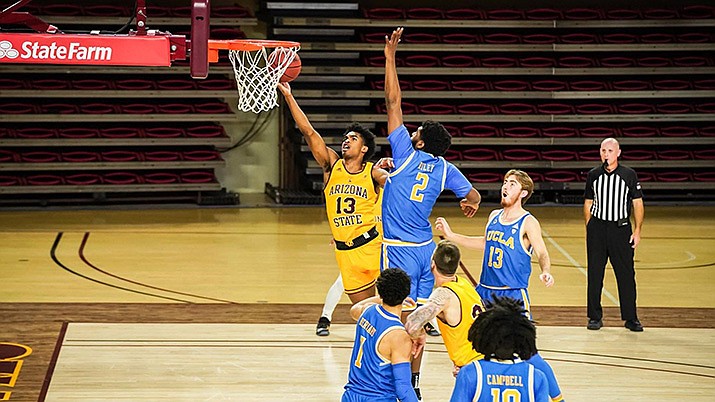 The Sun Devils took the court after a 21-day layoff and were down to eight players against heavily favored UCLA (8-2, 4-0 Pacific-12 Conference).

Arizona State's leading scorer and preseason All-American Remy Martin was attending a family funeral, two more were missing for COVID-19 issues and one had mono. Still, ASU (4-4, 1-1) gave the Bruins a fight.

There were 11 lead changes in the second half and, while UCLA led for 9:07 out of the final 9:12 of regulation, the Sun Devils forced OT when Alonzo Verge sank a pair of free throws with five seconds left.

Verge struck first in overtime but UCLA's David Singleton hit a second-chance 3-pointer, then he and Rile combined for the next 14 points.

Singleton scored 14 for the Bruins, making 4 of 6 from distance. Riley added 13 rebounds and Jules Bernard scored nine with 10 rebounds.

Verge led Arizona State with 25 points, seven boards and four assists. Josh Christopher added 22 points but was 0-for-6 from behind the arc, and Marcus Bagley scored 11 with 11 rebounds.

Arizona State forced 18 turnovers, scoring 16 points. The battle in the paint was even, but, unsurprisingly, the Bruin bench outscored ASU's 25-4.