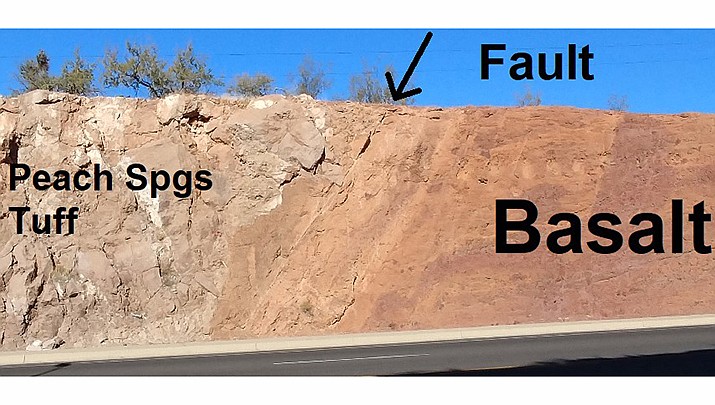 This photo shows a fault where basalt gives way to Peach Springs tuff in Kingman. (Photo by Luis Vega/For the Miner)

The earth is constantly shifting and moving, slowly but relentlessly. Continents are drifting; mountains are being raised while valleys are dropping. When one part moves and another doesn’t, something’s gotta give. When the rupture occurs, there’s an earthquake, catastrophic at times, or just shakes things up at others. The rupture is called a fault.

The fault can be a single strand or a set of parallel to subparallel strands. If movement is significant along the faults it can be identified because the two sides of the fault don’t match, i.e., there are different types of rocks on each side of the fault. Driving down El Trovatore Hill on Andy Devine Avenue there’s a great exposure of a fault. As the road starts down, the rocks are a red color – basalt. Half way down there’s a fault where the Peach Springs Tuff has been moved downward so that it’s on the downhill side of the fault. The two sides don’t match.

There are faults that shape the landscape such as the range-front faults, where the mountain side moves up and the basin side moves down. Follow a distinctive bed along the I-40 roadcuts until it’s offset by a fault. You can see the movement or displacement by how far the bed is offset. Movement along a fault can be several inches to hundreds of miles, like the San Andreas Fault.

Look at a map of Baja California and the mainland of Mexico. Baja looks like a puzzle piece that’s been moved northwest. At one time, Baja was connected to the mainland and through the years, it’s moving toward Alaska. This movement hasn’t been constant. It’s been jerky, with the land going up and down along the way. At one time, waters from the Gulf of California invaded the Colorado River channel to beyond present-day Bullhead City. If we’d lived there then, we could’ve sold beachfront property in Arizona. In the future (a few million years), there’ll be beachfront property again so don’t sell your land just yet.

Most fault planes aren’t vertical but dip to one side or the other. Imagine you are very small and can fit in the fault. The side you can stand on is called the footwall. The side above is called the hanging wall. If movement along the hanging wall is down in relation to the footwall, it’s a normal fault. If movement was the opposite way, it’s a reverse fault and if the movement was horizontal, it called a strike-slip fault.

Many times, faults are strongly broken and easily eroded forming valleys or long low areas. The valley you drive up to get to Hualapai Mountain Park is formed because of the Sawmill Canyon fault. This fault can be seen along Hualapai Mountain Road as easily-eroded, strongly-shattered rubble rather than a single strand.

The deep gashes in the earth’s surface visible on Google Earth in the Grand Canyon area show the effects faults can have on directing rivers and forming canyons. One of the faults, the Bright Angle Fault, visible just southeast of the North Rim Visitors Center (the North Rim is labeled on Google Earth), forms Bright Angle Canyon and continues in a southwesterly direction to just southeast of Wikieup where it was a weak spot in the earth, allowing the Kaiser Spring volcanic center to form. The Kaiser Springs area is still “cooking” as evidenced by the thermal waters at the spring.

Some faults allowed mineralizing fluids to enter and form veins. These are called fissure veins because they are both faults and veins. Many of the veins mined by the pioneers in the Cerbats and Hualapai mountains are fissure veins.

These veins were easily found by the miners because they are more resistant than the surrounding rock so the veins resist erosion. If you spot an adit or mine working on the side of a hill, look above it and many times you’ll see the resistant ledge that is the vein the miners were after.

Luckily, Kingman is not in a high-risk area for earthquakes but there are major faults nearby.

Along the northeast side of Hualapai Valley is the Grand Wash Fault.

The fault is buried so it can’t be seen, but geophysical studies have shown that it lies just west of the Music Mountains range front. Movement along this fault has been considerable and it could be a cause for earthquakes.

Several years ago, when a natural gas company was attempting to use the salt dome in Red Lake for gas storage by dissolving a large cavern and filling it with natural gas, I recommended they evaluate the possibility of rupture of the storage cavern if the Grand Wash Fault moved. This would’ve been catastrophic.

After studying this and other factors, the gas company decided to move somewhere else. I was thankful because it wouldn’t have been my “fault” if something went wrong.