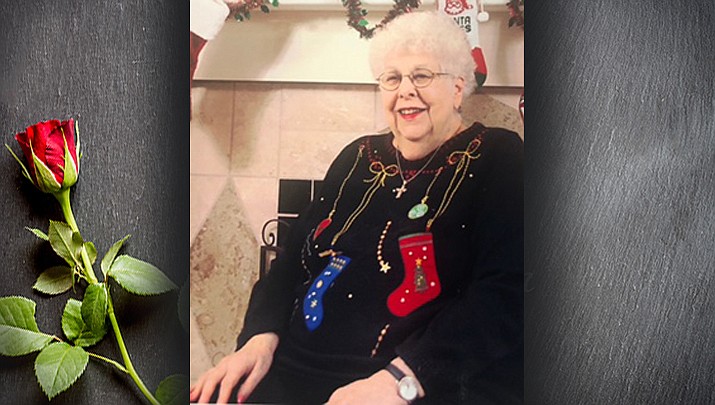 Rita Fae Selk departed this life on Jan. 6, 2021. She was born on April 28, 1931, in Aurelia, Iowa, the daughter of Delbert and Dorothy Rohwer. She graduated from Primghar Community High School in May of 1949 and married Kenneth Schoening in 1951. The couple had three children, Martin, Judy and Jan Schening. Rita went to business college in Omaha, Nebraska and enjoyed working as a secretary for many years in various businesses. She later went to beauty school, became a cosmetologist and had her own shop.

It was during the years that Rita and Ken lived in Primghar and Peterson that she became active as a Cub Scout den mother, a 4-H leader, an active supporter of the local Little League baseball club, and became involved in various church activities and functions. She also became a member of the American Legion Auxiliary and the Eastern Star organization.

Rita married Otto Selk, Jr. in 1976. Together they were caretakers of the Baumgartner Funeral Home for eight years, while at the same time Rita worked as a beautician at the Cherokee Mental Health facility. In 1989 the Selks moved to Okoboji, Iowa, where they enjoyed working together in the summers at the Arnolds Amusement Park. In the winter, the couple became “snowbirds,” spending the cold months in Kingman and returning to Iowa each spring. Finally, in 1997, the Selks made Arizona their permanent home.

Rita became an avid Diamondbacks fan and a dedicated volunteer in community services.

She served at the food bank for 10 years, joined the Kingman Social Club and the local Order of the Eastern Star. She enjoyed cooking, church potlucks, golfing, reading, crocheting, playing bridge and spending as much time as possible with her grandchildren. Birthday celebrations were especially important to her, as well as any time that she and her family could get together for food, fun and fellowship.

She loved 1940s style Big Band music, and she was proud of the fact that she had lived to see 14 presidents occupy the White House, from F.D.R to Donald Trump.

Rita was also an enthusiastic member of Kingman Presbyterian Church. She became involved in almost every aspect of the church life, including Bible study, the Presbyterian Women organization, the many church potlucks, and most importantly, Sunday morning worship services.

Since the fall of 1969, Rita had known Jesus Christ as her Lord and Savior, and being in worship was her top priority every Sunday morning. Often she expressed her gratitude for her church family. Frequently, she made the statement, “Living with the Lord has given me peace and joy, and my church family is a constant blessing to me.”

The loss of her daughter Jan and her grandson Luke within six months of each other in 2017 was almost more than she could bare, but she held to her faith in God, as she always did in every crisis.

Rita expressed the fact that she was at peace with her loss and that both Jan and Luke are in Heaven, waiting for her to join them there.

Rita Selk was preceded in death by her parents, Delbert and Dorothy Rohwer; an older brother, Richard Rohwer; husbands Kenneth Schoening and Otto Selk, Jr.; her daughter Jan Barrios; and her grandson Luke Nielsen. She leaves behind her son, Martin Schoening and his wife, Elaine; daughter Judy Nielsen and her husband Chris; eight grandchildren, 13 great-grandchildren as well as many relatives and friends.