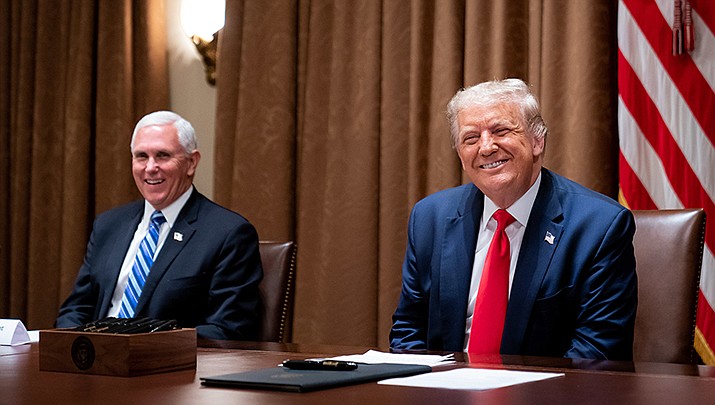 WASHINGTON – President Donald Trump and Vice President Mike Pence appear to have come to a détente after nearly a week of silence, anger and finger-pointing.

The two met Monday evening in the Oval Office and had a “good conversation,” according to a senior administration official. It was their first time speaking since last Wednesday, when Trump incited his supporters to storm the Capitol building as Pence was presiding over certification of November's election results. Pence and his family were forced into hiding.

During their conversation, the official said, Trump and Pence pledged to continue to work for "the remainder of their term" – a seeming acknowledgement that the vice president will not pursue efforts to try to invoke the 25th Amendment to remove Trump from office with nine days left in his term.

While his office had not definitively ruled out invoking the amendment, Pence had signaled that he no intention of moving forward with that kind of challenge. The House is prepared to cast a vote Tuesday calling on Pence to invoke the amendment.

“The president represents an imminent threat to our Constitution, our Country and the American people, and he must be removed from office immediately,” said House Speaker Nancy Pelosi. The House on Wednesday is expected to make Trump the first president in the nation’s history to be impeached a second time.

“We are further calling on the vice president to respond within 24 hours after passage,” Pelosi wrote. There is no mechanism that would force Pence to do so, making the move wholly symbolic.

Indeed, one person close to Pence said aides dismissed Democrats’ efforts to drag the vice president further into the fray as little more than a tactic aimed at damaging Pence’s political future. The person, like others, spoke on condition of anonymity to discuss internal deliberations.

Even if Pence had been on board with the sentiment to remove Trump, the appetite for doing so has waned across the administration since last week. While three members of Trump’s Cabinet have resigned, not one has publicly called for Trump to be forcefully removed from office.

Most Cabinet-level agencies did not respond Monday when asked where their agency head stood on the matter. At Interior, spokesman Nicholas Goodwin said Secretary David Bernhardt did not support such a move. Housing Secretary Ben Carson tweeted that he had not discussed the possibility with anyone and was focused on “finishing what I started in uplifting the forgotten women and men of America.”

After four years of fealty to the mercurial Trump, studiously avoiding conflict and steadfastly refusing to discuss their disagreements publicly, the events of the last week have put Pence in a highly unusual spot.

Pence allies have expressed outrage over what they have described as a malicious attempt by the president to try to scapegoat the vice president by pressuring him to take the impossible step of trying to block certification of the November election results by invoking powers he did not posses. After days of behind-the-scenes arm-twisting, Trump repeatedly singled out Pence during his pre-riot rally, wrongly insisting the certification could be halted as it got underway.

Trump then continued to tweet that Pence “lacked courage" as the president's supporters stormed the Capitol. Trump never bothered to check on the vice president's safety as Pence spent hours in a secure holding area with his staff and family as the rioters chanted about wanting to hang him outside the Capitol doors.

Trump, for his part, was furious that Pence refused to go along with his scheme – raging about the decision behind closed doors.

But Trump and Pence apparently chosen to bury the hatchet – at least for the time being. The senior administration official said that, during their Oval Office meeting, Trump and Pence discussed the week ahead and reflected on their accomplishments over the last four years.

The two also “reiterated that those who broke the law and stormed the Capitol last week do not represent the America first movement backed by 75 million Americans, and pledged to continue the work on behalf of the country for the remainder of their term," the official's readout said.

The official did not mention whether the disagreements between the men had been discussed.

There had been previous signs that Pence's refusal to defy the Constitution by blocking the electoral count did not mean he had an appetite for anything further.

Pelosi said in an interview with CBS' “60 Minutes" that Pence refused to come to the phone when she and Senate Democratic leader Chuck Schumer called to urge him to initiate 25th Amendment procedures.

“We were kept on the line for 20 minutes. ‘He’s going to be here in a minute, a minute, a minute.' Well, he never did come to the phone,” she said. “I was at home, so I was running the dishwasher, putting my clothes in the laundry. We’re still waiting for him to return the call.”

Even with Trump still in place, Pence has taken on some of the roles of the executive as Trump retreats ever further into a world of anger and conspiracy and continues to rage about his fate.

Pence, for instance, was the one coordinating with lawmakers and the D.C. National Guard during the Capitol siege. And on Friday, he was the one who called the family of Capitol Police Officer Brian Sicknick, who died of injuries sustained during the attack, to express condolences.

In the meantime, Pence has kept a low profile as he carries out the remainder of his current job.

The vice president led a coronavirus task force meeting at the White House on Monday and is expected to spend his remaining days focused on ensuring a peaceful transition of power to President-elect Joe Biden's incoming administration.

That includes attending the new president's inauguration, which Trump will be the first president since Andrew Johnson in 1869 to skip.

While the vice president will be present, an aide close to Biden's transition team said there was no expectation that Pence will play any major role in next Wednesday's program.