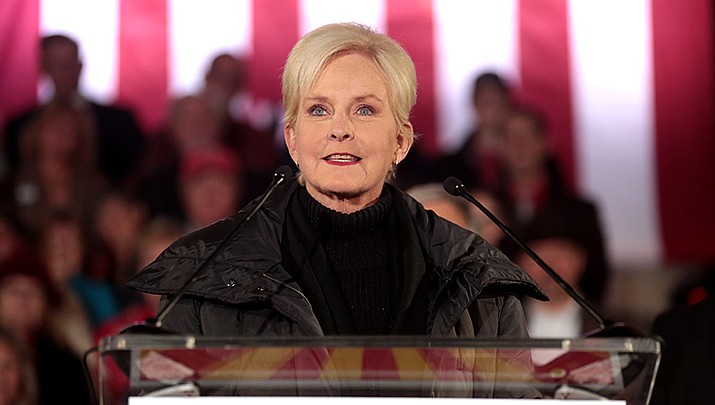 The Arizona Republican Party will vote on a resolution on Jan. 23 to censure Cindy McCain for endorsing Joe Biden in the presidential election. McCain is the wife of decease U.S. Sen. John McCain (R-Arizona). (Photo by Gage Skidmore, cc-by-sa-2.0, https://bit.ly/3ij1pxD)

PHOENIX - The Arizona Republican Party will vote Jan. 23 on a resolution to censure Cindy McCain for publicly endorsing President-elect Joe Biden, a Democrat.

On Saturday afternoon, the party reported the Maricopa County GOP had voted and passed a resolution to censure McCain, the widow of former Arizona Sen. John McCain.

But the state party later said in statement that “there was a call, a second, and near unanimous cheering/approval – but resolutions can’t be amended from the floor.”

Cindy McCain tweeted that she is “a proud lifelong Republican and will continue to support candidates who put country over party and stand for the rule of law.”

Sen. John McCain was censured in 2014 by the state party for what they saw as an insufficiently conservative voting record. McCain died of cancer in 2018.

Arizona Sen. Mark Kelly called the move to censure Cindy McCain “embarrassing and shameful,” adding that she “has always done what she thinks is right for Arizona and our country. That’s something we should all admire, no matter which party we belong to.”

SPRINGERVILLE - A $5,000 reward is being offered for information leading to the arrest of whoever is responsible for fatal shootings of four wild horses in northern Arizona.

TUCSON - A teenager has been arrested in connection with the death of a 61-year-old man on Tucson’s south side last weekend, according to Pima County Sheriff’s officials.

They said the 15-year-boy is facing first-degree murder charges. His name isn’t being released because of he’s a juvenile.

Martinez was transported to a hospital where he was later pronounced dead.

Detectives began an investigation into the man’s death and that led to the arrest of the teenage suspect.

No other details of the case have been released yet by sheriff’s officials.