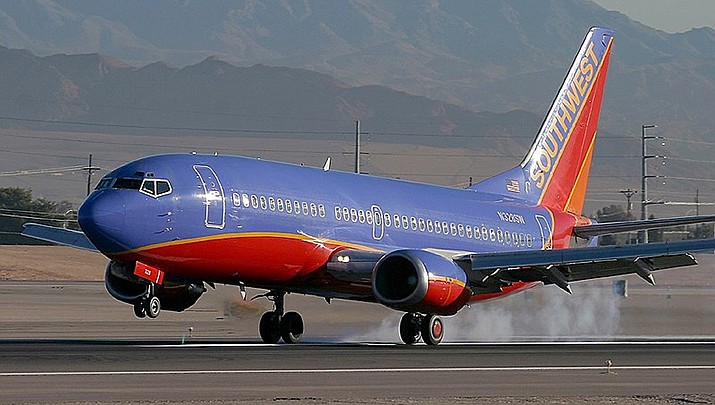 A Southwest Airlines flight arriving in Baltimore from Phoenix was taken to a remote section of the airport on Monday, Jan. 11 after the flight crew discovered a threatening note on the plane. (Public domain/Photo by https://bit.ly/3oEro6V)

BALTIMORE - A Southwest Airlines flight arriving from Phoenix was taken to a remote area of Baltimore/Washington International Thurgood Marshall Airport on Monday after the crew discovered a threatening note, authorities said.

Airport spokesman Jonathan King said Southwest Flight 2104 arrived around 5:15 p.m. before it was taken to the remote location.

According to the statement from Southwest, the 95 passengers and six crewmembers on board the Boeing 737-800 were taken to the terminal by bus. The aircraft has a capacity of 175.

The statement didn’t say what the note contained or where on the plane the note was found. A spokeswoman for Southwest said authorities cleared the aircraft and the passengers were allowed to claim their luggage.

PHOENIX - A Phoenix police officer fatally shot an armed man during a struggle after an unsuccessful traffic stop followed by a foot chase, a police department spokeswoman said Tuesday.

The shooting occurred early Tuesday morning after officers caught up to the man and saw that he had a gun, leading to a struggle for the man’s gun, Sgt. Ann Justus said.

According to Justus, the incident began when officers attempted to do a traffic stop but the vehicle didn’t stop. A police helicopter located the vehicle and the man then got out of it and took off running, she said.

No officers were injured, Justus said.

SCOTTSDALE - A man has been fatally shot after a road rage incident in Scottsdale, according to police.

They said 42-year-old Nathan Lindman died after the shooting Sunday.

The younger man left the scene and returned to his home, but he was followed by Lindman and a verbal altercation between the two ensued in the parking lot.

During the altercation, Lindman allegedly reached into a bag.

The other man told police that he feared Lindman was reaching for a firearm, so he drew his own weapon and shot him.

Police said a wounded Lindman drove out of the complex and collided with another vehicle.

Lindman was rushed to a hospital, but was pronounced dead as a result of the gunshot wound.