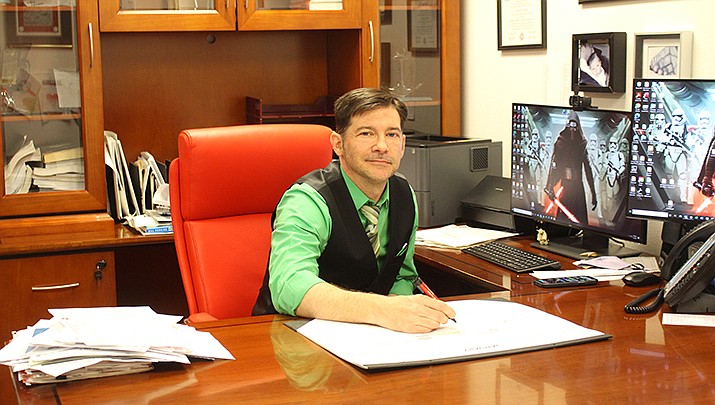 Scott Preston of Preston Investments, 4345 Stockton Hill Road, poses for a photo in his office on Monday, Jan. 11. The business has donated $10,000 to each to the Mohave County Sheriff’s Office, the Kingman Police Department and the Northern Arizona Fire District. (Photo by Agata Popeda/Kingman Miner)

KINGMAN – Last year, Scott Preston, owner and principal at Preston Investments, 4345 Stockton Hill Road, donated $5,000 each to the Mohave County Sheriff’s Office and the Kingman Police Department. This year he opted for $10,000 for each agency, and added the local Northern Arizona Fire District to the list.

While Kingman police “will purchase less-lethal munitions delivery systems,” as the City of Kingman Police Chief Rusty Cooper told the Miner, the sheriff’s office had a different sort of defensive weapon in mind – stab vests. But why do county deputies need stab vests? Is Kingman a capital of knife crime like London?

Far from that, Chief Deputy Dean McKie from the sheriff’s office explained: “The stab vests will be issued to detention officers, for use inside the jail, not deputies. They protect from edged weapons.”

The county jail has about 100 detention officers who will be using those vests, as well as 20 detention assistants and three detention supervisors.

“We are grateful for all the local businesses who support the sheriff’s office,” McKie said. “Preston Investments are unique to these types of donations. This is the second consecutive year. This year it was decided that the donation would be used for the jail. After consensus with staff it was determined that the funds would best be used to purchase additional stab vests allowing every detention officer to be issued one.”

"We have not yet identified the brand of body armor, but we are looking to acquire 85 vests, said Captain Don Bischoff, who is in charge of the jail. “We had funds for roughly two-thirds of the vests; the Preston donation is what will allow us to purchase enough for each officer."

“Good will,” said Preston when asked about his motivation. “I did it because I could.”

Preston has been working with Cooper and McKie for a couple of years now.

“We [also] did stuff with the school, with the hospital,” Preston said. “I like to support locals as much as I can. I’m trying to do something for them.”

Preston usually does his yearly donations in October or November, when the year is over and he can see how things went financially. This year things went well – hence the extra generosity – and each agency chose what they needed most.

“They talk to me about it,” Preston said. “They told me they were looking into stab vests. I always ask: ‘If there’s anything that you guys need’ and I say ‘yes.’”

He said “yes” to stab vests, too, “not that I knew what it was,” Preston joked. “I guess someone could tell me one thing and buy another. But overall I always say ‘OK, that sounds good’ and send them a check.”

NAFD also received $10,000 this year and was contacted for the story, but they did not disclose their plans regarding the donation in time for the information to be included.