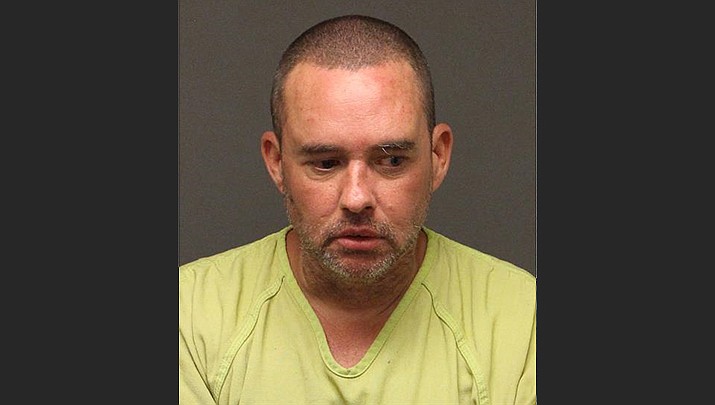 KINGMAN – Robert Anthony Spano, 42, of Kingman, was arrested by the Kingman Police Department on Thursday, Jan. 7 after allegedly assaulting a 76-year-old woman and trying to enter multiple vehicles.

KPD wrote in a news release that officers responded to a report of a male having assaulted an elderly female in the parking lot of a business in the 3300 block of Stockton Hill Road at approximately 3 p.m.

During the response it was reported that the male subject, identified as Spano, was running and attempting to steal vehicles and assaulting people at other locations. Officers arrived to locate Spano in the 1900 block of Morrow Avenue where he was arrested.

According to KPD, the investigation revealed that the first call to 911 reported that Spano had confronted and assaulted a 76-year-old woman in the parking lot of Walmart. It was alleged that he punched the victim in the head and face, knocking her to the ground, prior to attempting to steal her vehicle.

He is reported to have made comments about being set on fire before he tried to take the keys out of her pocket. He then fled on foot, KPD wrote, to Cracker Barrel in the 3500 block of Stockton Hill Road.

There, witnesses reportedly observed Spano attempting to enter multiple parked cars while making comments about the world coming to an end.

KPD wrote that Spano then went to Golden Corral, also in the 3500 block of Stockton Hill Road. He reportedly entered the restaurant and confronted the manager, at which time he tried to walk behind the cashier’s counter. He is reported to have been making statements similar to those made at the previous location.

The manager had to push Spano away, at which time he exited the restaurant. He was then reportedly seen trying to enter cars in the parking lot.

KPD wrote that Spano then ran to a therapy/rehab office in the 1900 block of Morrow Avenue. There, he allegedly confronted a 33-year-old woman and a 56-year-old woman standing near their vehicle, and began making comments about the world coming to an end. He was also asking if “they were going to shoot him.”

“Spano attempted to enter their vehicle, which was occupied by a 3-year-old toddler,” KPD wrote. “Both women struggled with Spano, attempting to keep him from stealing the car and away from the toddler. The 33-year-old woman suffered assorted injuries including a broken ankle. Spano fled as officers were arriving.”

Spano then allegedly jumped into a fenced yard in the 1900 block of Morrow Avenue. Officers subdued Spano with a Taser at approximately 3:14 p.m., placing him into custody. He reportedly continued to resist by kicking and trying to bite arresting officers.

Spano was arrested on suspicion of felony aggravated assault and three counts of robbery, as well as misdemeanor criminal damage, criminal trespass and disorderly conduct.