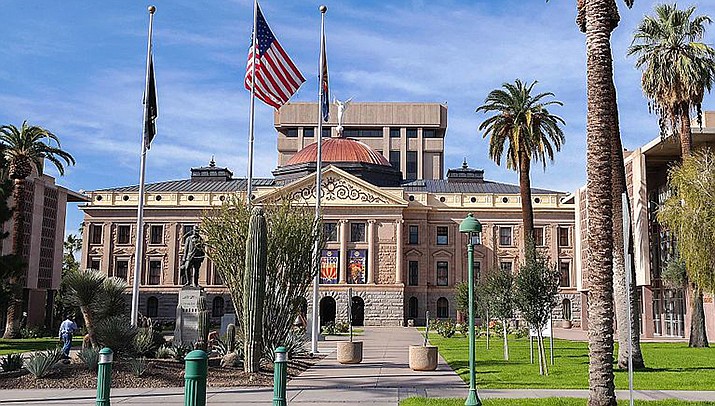 The Republican-controlled Arizona Legislature is moving to strip the state utility regulation commission of the power to require electric utilities to get a certain percentage of their power from renewable sources. The state capitol in Phoenix is shown. (Photo by Visitor7, cc-by-sa-3.0, https://bit.ly/3o0fG5x)

PHOENIX – The Republican-controlled Arizona Legislature is moving to strip the state utility regulation commission of the power to require electric utilities to get a certain percentage of their power from renewable sources.

Identical proposals in the House and Senate would stop the Arizona Corporation Commission from adopting a proposal that would require half the state’s power to come from solar and other renewable sources by 2035 and 100% by 2050.

The commission adopted draft rules expanding the current regulation of getting 15% of power from renewables by 2025 in November and can vote on final rules after a public comment period closes. That 15% rule was adopted by the commission in 2006 and was upheld by the state Court of Appeals in 2011.

A 2020 state Supreme Court opinion, though, called that ruling into question.

The move by the Legislature to gut the commission's right to require utilities to use renewable power comes as the nation is increasingly heading toward getting larger amounts of electricity from solar, wind, and other renewable energy. The nation is moving away from coal-fired power generation sources as carbon emissions that have driven climate change are targeted for elimination.

A committee delayed debate on the House proposal Tuesday, while a Senate panel is set to consider its version of the bill Wednesday.

Members of the commission are split on the proposal. Republican Justin Olson said the commission overstepped its bounds by passing the initial rules in 2006 and is doing the same by trying to boost the requirements. The commission was created by the framers of the Arizona Constitution to oversee public benefit corporations, such as water and power providers, that are awarded a monopoly over their territories.

“The constitution expects that the commission will set just and reasonable rates for utilities, and yet the commission has gone far beyond that to put in place policies that really are not consistent with their constitutional authority,” Olson said Tuesday.

He pointed to a July 2020 Arizona Supreme Court ruling in an unrelated case where the court took pains to decipher the complicated history of legal rulings about the commission's power. That ruling noted that setting rates was a power granted by the constitution but other authority it held was only with the permission of the Legislature.

“It is a big deal in regards to Arizona’s economy and jobs here in the state of Arizona,” Tovar said in an interview. “You have many businesses, whether it is small or large, that have made commitments in trying to move forward with clean and sustainable energy programs, for their corporate goals.”

Tovar also disagrees with Olson's interpretation of the state Supreme Court ruling, saying the mere mention of the renewable energy rule in a case does not mean they are not allowed.

“Bottom line: We aren’t going to know what the scope of our authority is until this is challenged in court and the current law upholding our jurisdiction to promulgate energy rules is still in effect until such time as the court overturns it,” Tovar said in a follow-up statement. “No bill from the Legislature or statement from another commissioner changes those two facts.”

Arizona Public Service, the state's largest electric utility, last year vowed to switch to 100% carbon-neutral power generation by 2050. The move came after it fought a 2018 voter initiative that would have mandated the switch, and which the utility argued would cost ratepayers $1,000 per year.

The company said its new plan would not cost ratepayers more.

The company said in a statement Tuesday that it is not involved in pushing the current legislation.

“APS is not participating in this legislation, but we will stay the course with our own clean energy commitment to serve customers with 100% carbon-free electricity by 2050,” a company statement said.