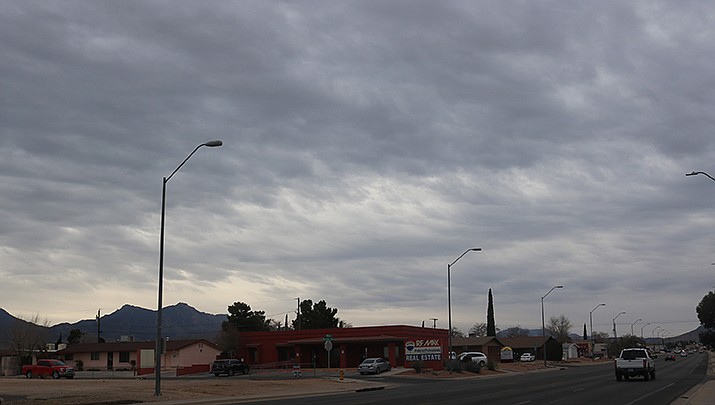 NEW YORK – Forecasters say parts of the drought-stricken Southwest can expect some relief from off-and-on wet weather the rest of this week and into next, with rain expected in lower elevations and snow in higher terrain.

The storm that passed across the region earlier this week “is just the first in a series of systems that will continue to deliver much-needed precipitation over the next several days,” AccuWeather said Wednesday.

The private forecasting service said the next round of rain moving through the Southwest through Thursday is likely to be heavier than the general amounts of a quarter of an inch that many areas got Tuesday.

National Weather Service forecasters in Flagstaff in northern Arizona said a series of stronger and colder storms will produce widespread rain and snow this weekend and early next week.

The weather service said light showers over New Mexico’s southwestern mountains and south-central mountains would be followed by increased precipitation Thursday and again this weekend and early next week.

PHOENIX - Arizona lawmakers are considering legislation to quadruple the size of a program that allows people to use tax money for private school tuition for foster children and students with disabilities.

The measure is the latest proposed expansion of Arizona's wide-ranging programs to aid private and religious schools with public money.

Republicans advanced the measure out of a Senate committee in a party-line vote Wednesday, saying the program creates more choices for parents who couldn't otherwise afford private school tuition.

“Having that ability to move around to different schools to find the best fit is what we should be focused on, and how do we get every child in the environment so they can succeed,” said Sen. David Livingston, a Peoria Republican who sponsored the legislation, SB1041.

Democrats said the state shouldn't be further siphoning money from the state treasury that could be used to pay for public schools, especially as Republican Gov. Doug Ducey pushes for a $600 million-per-year tax cut.

“Our public schools are really struggling with all of what they need to do to survive given the pandemic, and this is not the time to expand a tax credit that goes to private schools,” said Sen. Kirsten Engel (D-Tucson).

Arizona has four tax credits that allow for the diversion of tax money from the state's treasury to cover private school tuition. Instead of paying their tax bill, individuals or businesses can donate to “school tuition organizations" that hand out scholarships for private school students. Donors can recommend that their money benefit a particular child but can't require it.

The scholarships can fund up to 90% of what the state would have spent to educate the child in a public school.

For all four credits, just under $205 million was diverted from the treasury in the 2019 fiscal year, the most recent year for which the Arizona Department of Revenue has published data.

Livingston's bill would expand the cap on the smallest of the four tax credits, which applies to any child who has ever been in foster care or ever had a disability. There are no income limits.

The cost is currently capped at $5 million. His bill would take the cap to $20 million over the next three years.

PHOENIX - A former Arizona politician must report to prison Thursday to begin serving the first of three sentences for running an illegal adoption scheme that paid pregnant women from the Marshall Islands to come to the U.S. to give up their babies.

Paul Petersen, a Republican who served as Maricopa County assessor for six years and also worked as an adoption attorney, was sentenced to six years after pleading guilty in federal court in Arkansas to conspiring to commit human smuggling.

Petersen, who has acknowledged running the adoption scheme, is awaiting sentencing in state courts in Arizona for fraud convictions and in Utah for human smuggling and other convictions. Sentencing dates have not yet been set for those cases.

Prosecutors have said Petersen illegally paid women from the Pacific island nation to give up their babies in at least 70 adoption cases in Arizona, Utah and Arkansas. Marshall Islands citizens have been prohibited from traveling to the U.S. for adoption purposes since 2003. Petersen will serve his sentence in the Arkansas case at a federal prison near El Paso, Texas.

The judge gave him two years longer in prison than sentencing guidelines recommended, describing Petersen’s adoption practice as a “criminal livelihood” and saying Petersen knowingly made false statements to immigration officials and state courts in carrying out the scheme. Petersen has appealed the punishment.

In Arizona, he pleaded guilty to fraud charges for submitting false applications to the state’s Medicaid system so the birth mothers could receive state-funded health coverage – even though he knew they didn’t live in Arizona – and for providing documents to a juvenile court that contained false information.

Petersen has said he has since paid back to the state $670,000 of more than $800,000 in health care costs that prosecutors cited in his indictment.

Earlier in his life, Petersen, who is a member of The Church of Jesus Christs of Latter-day Saints, had completed a proselytizing mission in the Marshall Islands, a collection of atolls and islands in the eastern Pacific, where he became fluent in the Marshallese language.

He quit his elected job as Maricopa County’s assessor last year amid pressure from other county officials to resign. As assessor, Petersen was responsible for determining property values in the county that encompasses Phoenix.