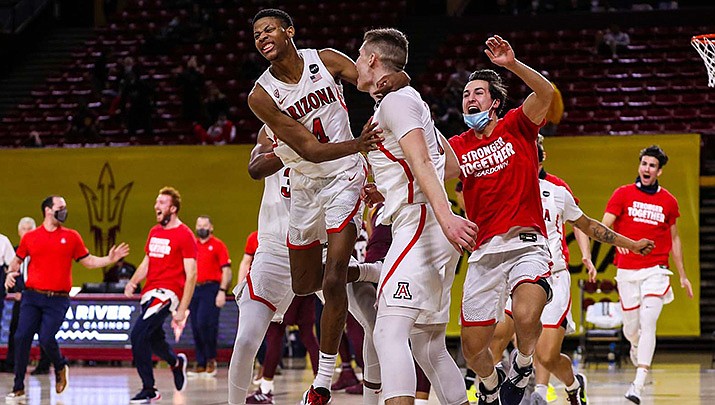 Arizona players celebrate after pulling off an 84-82 win over rival Arizona State in Tempe on Thursday, Jan. 21. (Photo by Mike Christy/Arizona Athletics)

TEMPE, Ariz. - Azoulas Tubelis had a hard time adjusting to Arizona State's tempo and was a nonfactor well into the second half.

With game on the line, the Lithuanian freshman came up with the two biggest plays of the night — maybe of the season.

“It wasn't until about the 15-minute mark that he came alive for us and obviously had that big offensive rebound,” Arizona coach Sean Miler said.

Arizona State (4-7, 1-4 Pac-12) appeared to be in control after taking a seven-point lead, but Arizona rallied to tie it at 82-all with a minute left.

The Sun Devils set up for a final shot and Martin took the ball down the lane, but Tubelis got a piece of the ball, along with his arm.

The Wildcats (11-3, 5-3) rushed the ball up the floor and James Akinjo shot an air ball on a 3-point attempt — he said it was a pass — while being harassed by Marcus Bagley.

Left alone in the lane, Tubelis plucked the ball out of the air and laid it over the rim, sending the Wildcats rushing onto the floor.

“I saw the ball going shot and I just caught it and finished,” said Tubelis, who had eight points.

Arizona State let a second straight game slip through its grasp. This one was much tougher to take because of the way it happened.

“We played a winning game and Remy Martin deserved to go to the free-throw line because he was fouled by a player not in the restricted zone,” Arizona State coach Bobby Hurley said. “The player did not have his arms go straight up, one of his arms contacted Remy Martin when he was shooting the ball. I don't know what else we really need to discuss”

Martin and Josh Christopher had 18 each to lead Arizona State.

The Sun Devils started the season among the favorites to win the Pac-12. They've yet to live up to expectations, plagued by COVID-19 issues and inconsistent play on the court.

Arizona State missed five games to positive tests and has yet to have its full team in uniform this season. The Sun Devils arrived at the rivalry game on a three-game losing streak, including a one-point loss to Oregon State after a couple of late defensive breakdowns.

Arizona clobbered the Beavers by 34 points in its last game.

The Sun Devils continued to struggle with turnovers — 12 in the first half after four total against Oregon State — but used a 9-0 run to pull within two.

Akinjo had 14 points and three of Arizona's seven 3-pointers to help the Wildcats lead 35-30 at halftime.

Arizona State cut down on the turnovers in the second half and the teams traded baskets seemingly every time down the court during one stretch midway through.

Martin became the catalyst after a quiet first half and hit a long 3-pointer to cap a 12-2 run that put Arizona State up 76-69.

The Wildcats clawed back to tie it with a minute left and Tubelis came through at both ends of the floor for Arizona's first win in Tempe since 2018.

“It's been a very disappointing year in these types of games,” Hurley said. “We are not getting the type of results we deserve.”

Arizona appeared to be in trouble after Martin scored 15 of his points in the second half, but pulled out an impressive win after losing by one to Arizona State last year in Tempe.

The Sun Devils shook off a shaky start to play their best game of the Pac-12 season, yet again failed defensively in a crucial moment.

The 6-foot-9 sophomore had not played since Dec. 16 against UTEP due to his illness and COVID-19 issues, but looked sharp against the Wildcats.

Graham played well at both ends in 25 minutes, finishing with 10 points on 4-of-7 shooting and three blocked shots.

“He's been very limited in his time on the court and it was big for him to step up the way he did tonight,” Hurley said.