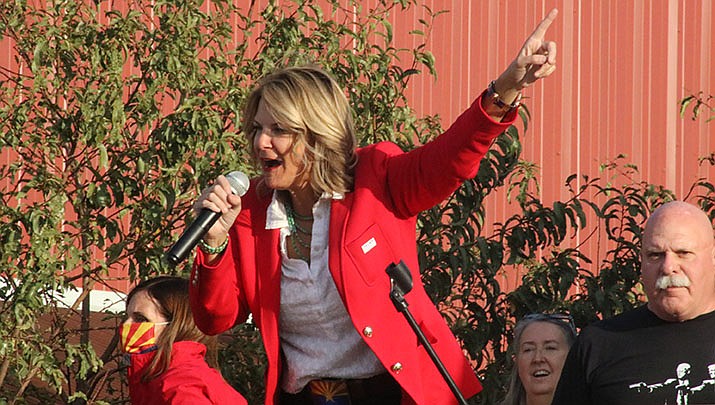 Kelli Ward, shown speaking to a crowd in Kingman at a rally on Nov. 2, 2020, has been reelected as chairman of the Arizona Republican Party. (Miner file photo)

PHOENIX – Arizona Republicans on Saturday reelected Kelli Ward as party chair, giving a second term to one of Donald Trump's most unflinching supporters even after the GOP lost ground in the state last year.

Ward's combative style delights Trump's strongest supporters but worries longtime GOP insiders who have watched the party turn off crucial voters in the suburbs. She was a prolific promoter of baseless theories of election fraud and filed several lawsuits that were tossed by judges for lack of evidence.

Ward came out on top in a four-way race, securing a narrow majority on the second ballot, according to a party spokesman. In the final vote, she edged past Sergio Arrellano, a businessman who said the GOP was narrowing instead of broadening its message and promised to help the party appeal to Arizona's growing Latino electorate.

Members of the state GOP committee were slated to vote later Saturday on a series of censures of some of the GOP's most successful figures who have found themselves crosswise with Trump: Cindy McCain, former Sen. Jeff Flake and Gov. Doug Ducey.

After dominating Arizona politics for decades, Republicans now find themselves on their heels in the state’s highest offices. President Joe Biden narrowly eked out a victory here, becoming just the second Democrat in more than five decades to win the state. Consecutive victories in 2018 and 2020 gave Democrats control of both U.S. Senate seats for the first time in nearly 70 years.

Ward, a physician and former state legislator who lost two Republican primaries for the U.S. Senate, defeated three rivals to hold onto her role as chairman.

In a brief interview on Thursday, Ward acknowledged “disappointment at the top of the ticket” but said she and many other Republicans still question the results showing victories for Biden and Democratic Sen. Mark Kelly. Judges have rejected eight lawsuits challenging Arizona’s election results.

Ward said she’s a “Trump Republican” who will “always put America first, who believes in faith, family and freedom.” The way forward for the GOP, she said, is keeping Trump’s 74 million voters engaged.

“Yes, I will be radical about those things because those are the things that keep this country great,” Ward said. “The people who are complaining are the people who actually put us in this spot where we are in Arizona, people who have been mamby pamby, lie down and allow the Democrats to walk all over them.”

Ward's detractors say she's playing to a small segment of electorate and is driving crucial voters toward the Democrats, particularly suburban women with college degrees. Democrats have seen their fortunes rise thanks to those suburban voters along with a growing young Latino electorate and newcomers moving to sunny Arizona and bringing their liberal politics from back home.

The proposed censures target some of Arizona’s best-known Republicans, two of whom have won statewide general elections.

Cindy McCain, the widow of longtime Sen. John McCain, the 2008 Republican nominee for president and a beloved Arizona politician, endorsed Biden and became a powerful surrogate for the Democrat following years of attacks by Trump on her husband.

“Maybe (Ward) should be reminded that my husband never lost an Arizona election since his first win in 1982,” McCain said in a statement.

Flake was one of the few congressional Republicans who was openly critical of Trump for failing to adhere to conservative values. He declined to run for reelection in 2018 and endorsed Biden in last year’s election.

“If condoning the President’s behavior is required to stay in the Party’s good graces, I’m just fine being on the outs,” Flake wrote on Twitter.

Ducey is being targeted for his restrictions on individuals and businesses to contain the spread of COVID-19. While it’s not mentioned in the proposed censure, he had a high-profile break with the president when he signed the certification of Biden’s victory. Ducey declined to comment through a spokesman.

Ward played down the significance of the proposed censures, noting that they don’t prevent anyone from running for office as a Republican.

“Many times it just makes them turn even more toward the Democrats, in my opinion,” Ward said.