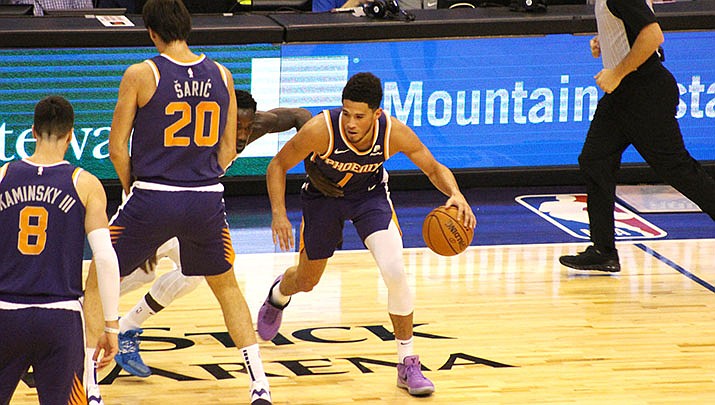 Devon Booker and the Phoenix Suns lost to the Denver Nuggets in overtime on Friday. (Miner file photo)

Will Barton pushed the Nuggets ahead 124-123 with 1:37 left in overtime on a driving layup and Jamal Murray’s 13-foot jumper put them up three points with 28.5 seconds left. Denver held on from that point, winning for the third time in four games to improve to 8-7 this season.

Devin Booker led the Suns with 31 points but took a hard fall late in overtime and didn’t play the final few possessions.

Phoenix’s offense looked out of synch without its leading scorer on the floor and didn’t score a field goal after he left. Suns forward Deandre Ayton had 27 points and 13 rebounds. Mikal Bridges added 24 points and 10 rebounds.

GLENDALE, Ariz. - Conor Garland had a goal and an assist, Darcy Kuemper stopped 29 shots and Arizona handed Vegas its their first loss of the season 5-2.

The Coyotes bounced back from a drubbing two nights earlier in Vegas with one of their best games of the early season on Friday.

Arizona’s Nick Schmaltz scored for the third straight game and had an assist. Christian Dvorak also had a goal and an assist. Derick Brassard scored his first of the season and Jordan Oesterle closed it out with an empty-net goal.