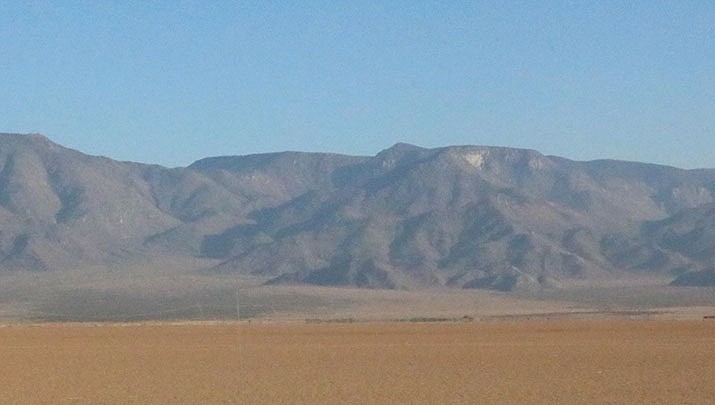 Fine dust is deposited on Red Lake near Kingman as runoff evaporates in the closed basin. (Miner file photo)

Water is subject to the relentless force of gravity. Unless there’s something that gets in its way, water runs downhill. When water goes downhill, it takes everything that isn’t tied down – rocks, sand, silt, etc. This is called erosion. The amount of energy the water has determines what it takes. If it has high energy – steep gradient – it takes everything from boulders to silt. When it loses energy because the gradient decreases, it has to start dropping the boulders and eventually the sand, continuing only with the silt which colors the water tan. Eventually, when the water has lost all energy, it drops everything and deposition occurs.

Kingman is at an elevation of 3,300 feet above sea level. From Kingman to sea level is a drastic drop in elevation that would cause a very steep gradient but there’s a lot going on before water can get to sea level. First, it has to travel overland several hundred miles to get to the nearest sea. Closed basins are one of the few places that can stop water from its journey. In Arizona, we have two closed basins – Hualapai Basin and Wilcox Basin (southeastern Arizona).

Rain that falls in Hualapai Basin and runoff from the Cerbats, Music and Peacock mountains, and that portion of the Hualapai Plateau that flows into Truxton Wash, go into Red Lake and just sit there until the water evaporates. The basin divide that is located near Pierce Ferry Road blocks the surface runoff from making it to the Colorado River. Along the range fronts where the gradient is steep, large boulders are washed down until the gradient decreases and the boulders drop out, forming a sediment type called fanglomerates (a conglomerate formed on an alluvial fan (an alluvial fan is a sedimentary formation at the mouth of canyons). If you’re hiking and enter a canyon from the flats, undoubtedly you’ll pass through these coarse sediments at the mouth of the canyon. As the wash loses gradient, the sediments that the water can carry become finer-grained gravel to sand and then to silt. As the runoff enters the center of the basin, the only thing it has left is very fine dust. My friend calls it “Bug Dust.”

Deposition is occurring in Red Lake. It’s been going on for a long time. Oil exploration drill holes in Red Lake have passed through more than 10,000 feet of sediments including a very thick salt dome. To the south of Hualapai Basin is its sister basin, the Big Sandy Valley. Big Sandy was a closed basin. But now it’s no longer a surface-water basin that stops water. It was breached – the dam that closed off the water was eroded. Gravity won. Runoff in the Big Sandy now goes south to the Santa Maria River, the Bill Williams River, the Colorado and eventually, the Gulf of California. The sediments of what was once the Big Sandy basin are being eroded.

South of I-40, on Highway 93, the remnants of the basin are visible. The flat-topped alluvial ridges are old river terraces that indicate where the level of the basin surface used to be. Because the breach in the dam occurred in stages, erosion of the ancient flat-lands occurred in steps. The oldest terraces are on top, then old terraces below, then newer terraces as the Big Sandy wash continues eroding. South of Wikieup near mile post 130, you’ll see the “guts” of the basin - green and tan-colored fine-grained sediments that erode into vertical cliffs. These cliffs were used by pioneer ranchers to herd cattle. They called them natural corrals. One of the best examples is Natural Corrals Wash just north of Wikieup. These sediments hold evidence of a more humid climate. Vertebrate fossils of early horses, camels, antelope, beaver, dogs, cats and even bear have been found in the sediments.

Continuing south you go through the “dam” that formed Big Sandy basin. The basin sediments give way to volcanic deposits that formed the plug that stopped the southward flow, for a while. These volcanic rocks are part of the Tertiary-aged Kaiser Volcanic center. There are several old volcanoes that supplied the lavas and built the “dam.” As a matter of fact, the rocks down there are still hot, as evidenced by the thermal water that flows from Kaiser Spring. If you have time, park under the Kaiser Spring bridge and hike down the wash about 2 miles to the spring. I recommend you do it only in the winter as temperatures in the wash can be unbearable during the hotter months. As with all hot springs in Arizona, try not to get the water in your nose as it might have a parasite that can make you very sick.

Nevada and western Utah have several closed basins. In fact, that area of the U.S. is called the Great Basin because none of the rivers make it to the sea. The largest closed basin holds the Great Salt Lake. During the Ice Ages when the climate was wetter, many of these basins held huge lakes teeming with prehistoric animals. On the mountains along the outskirts of Salt Lake City, old shorelines from the time the lake covered much of western Utah, can be seen. The shorelines are marked by gravel bars – Mother Nature’s bath tub rings.

Another relic surfaces as Lake Mead's water level continues to decline
Wilderness Common Sense: Finding water in the desert
Column | Mohave County geology: Why the mountain looks that way?
More can be done to address our water problem, it just takes more money
Water in the Bank: A trio of water infiltration basins will capture runoff to help recharge the Hualapai Valley Water Basin
Event Calendar