Rough Roads Ahead: 41% of Kingman streets are in ‘very poor’ condition 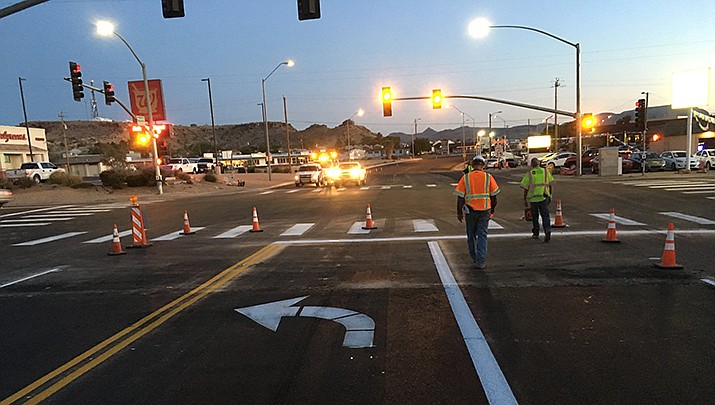 City of Kingman employees work on city streets is photo. Just 24% of the city’s streets are ranked as being in “very good” condition. (City of Kingman courtesy photo)

City of Kingman employees work on city streets in the photos at top and above. Just 24% of the city’s streets are ranked as being in “very good” condition. (City of Kingman courtesy photos)

With 434 lane miles of streets to maintain, and a pavement condition index rating dropping each year, the City of Kingman is still trying to get out of a “reactive maintenance trap.”

City Streets Superintendent Jack Plaunty explained to city council on Tuesday, Jan. 19 that the key to preserving the city’s asphalt is to halt oxidation, which stems from UV rays and moisture.

The city has been spending on average $864,000 a year on pavement preservation, however, has to approach the issue from two separate directions.

That’s where reactive and proactive road maintenance come into play. Plaunty said Kingman has been in a reactive maintenance trap which sees work deferred due to a lack of funds. The kicker is that the longer the city waits to address an issue, the more expensive it becomes in the future.

“Every dollar we spend now keeping a road in good condition is going to save us $6 to $14 in the future,” Plaunty said, adding he believes those figures are conservative. “It becomes very expensive very quick when you defer your maintenance, and that’s when we’re dropping out of those good condition categories we can do preventative maintenance on, and now we’re moving into rehabilitation and reconstruction.”

Plaunty explained city streets sit in the 25th percentile when compared with other cities utilizing the same street-mapping service as Kingman, which had a pavement condition index rating of 42 in January 2019. As of October 2020, that PCI had dropped to 37. The average is 69, and the index runs from zero to 100.

The news doesn’t get much better from there. Plaunty said more than 50% of Kingman’s streets network have roads with less than five years of service life remaining. While 24% of local streets are in “very good” condition, 41% are in “very poor” condition.

Plaunty said the most achievable target would be for the city to accomplish a 10-point PCI increase over the course of the coming decade. However, with just less than $65 million in deferred maintenance, that increase would require approximately $5 million a year through 2031 being spent on pavement preservation.

“We need to take this head on and work at this quickly because our network is continually deteriorating and the further it goes down into that lower PCI and lower service life, again, the more expensive it’s going to be for us to bring them back to good condition.”

Without a dedicated funding source for pavement preservation with the repeal of the 1% increase to the sales tax rate, and with Plaunty saying counting solely on Highway User Revenue Funds is “putting all your eggs in one basket,” the city will once again have to consider funding options.

The city will target major roadways, arterial and collectors for pavement preservation in 2021, which means residential streets will have to wait for attention. Plaunty said major roadways are about all the city can handle at the moment at current funding levels.

“They carry the most people, they carry our economic lifeline to our businesses, and they’re also the most costly to repair and rehabilitate,” Plaunty said of major roadways. “So we want to make sure that those roads we try to keep in good condition.”