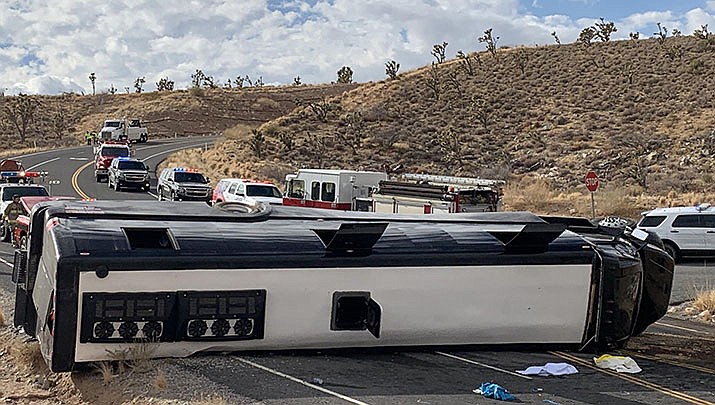 This tour bus carrying 47 passengers overturned near Mile Post 5 on Diamond Bar Road near Dolan Springs while en route to Grand Canyon West on Friday, Jan. 22. One passenger was killed and 44 were injured. (MCSO photo)

KINGMAN – A tour bus that rolled over last week on the way to Grand Canyon West, killing one person and injuring others, was operated by a Las Vegas company that offers tours guided by comedians, authorities said Monday.

The Mohave County Sheriff’s Office identified 53-year-old Shelley Ann Voges of Boonville, Indiana, as the person who died in the crash in a remote area Friday.

More than 40 people were on the bus operated by tour company Comedy On Deck. Three who were critically injured, including two later transported to Las Vegas for treatment, are now listed in stable condition. Forty other passengers were treated and released from an Arizona hospital.

Investigators said the majority of the passengers on the bus were from the United States. No other identities were released.

Authorities say the cause of the rollover is under investigation, though a fire official has said speed appeared to be a factor. No other vehicles were involved in the crash.

Comedy On Deck brings customers from the Las Vegas Strip to the Hoover Dam and Grand Canyon West in tours guided by professional comedians, according to the company's website. In a video, Comedy On Deck said safety concerns led to a practice of using a comedian as a guide and employing another person as a driver, rather than have a driver take on double duties.

No one picked up the phone when The Associated Press called the tour company several times Monday. The company also didn’t immediately respond to an email.

A decade ago, Comedy On Deck agreed to a $1,980 settlement with regulators for violating a policy that bars commercial vehicles from operating without authorization from federal transportation officials, according to records.

The Federal Motor Carrier Safety Administration, which regulates bus companies and other commercial vehicles, declined to say Monday whether that means Comedy On Deck was accused of using a bus that wasn’t registered or licensed to transport passengers.

It's unknown whether traffic citations or criminal charges will be filed against the driver, whose identity hasn’t been released.

Anita Mortensen, a spokeswoman for the Mohave County Sheriff’s Office, said the agency is in the process of interviewing passengers to determine what caused the rollover.

The bus was heading to Grand Canyon West, about 2 1/2 hours from Las Vegas and outside the boundaries of Grand Canyon National Park. The tourist destination sits on the Hualapai reservation and is best known for the Skywalk, a glass bridge that juts out 70 feet from the canyon walls and gives visitors a view of the Colorado River 4,000 feet below.

Before the pandemic, about 1 million people a year visited Grand Canyon West, mostly through tours booked out of Las Vegas. The Hualapai reservation includes 108 miles of the Grand Canyon’s western rim.

Other deadly crashes have happened before in the area.

Four Chinese nationals died in 2016 when their van collided with a Dallas Cowboys staff bus headed to a preseason promotional stop in Las Vegas.

In 2009, a tour bus carrying Chinese nationals overturned on U.S. 93 near the Hoover Dam, killing several people and injuring others. The group was returning from a Grand Canyon trip.

MCSO wrote in a news release that its investigation continues.

Three passengers were seen at Kingman Regional Medical Center with critical injuries. Two were transported to Las Vegas hospitals for treatment, with all three now in stable condition, MCSO reported.

There were 40 additional passengers on the bus treated at KRMC prior to being released. The majority of the passengers were from the United States, though one was from Europe, and ranged from 20 to 60 years of age.