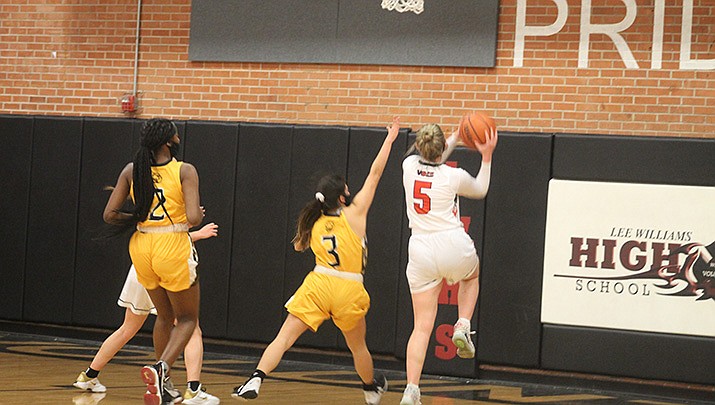 KINGMAN – The Lee Williams High School girls basketball team won its second straight game on Thursday, Jan. 28, jumping out to a big lead and coasting to a 57-31 win over Barry Goldwater High School.

The Lady Vols were running on all cylinders in every facet of the game offensively, hitting four 3-point shots and recording 19 assists.

Sophomore forward Rebecca Arave tallied 18 points and registered her third triple-double in as many games with 10 rebounds. Senior Savannah Jimenez meshed 12 points and sophomores Victoria Gravell and Siara Satoafaiga came off the bench to contribute eight points apiece for the winners.

The Volunteer defense was very stingy, holding the Bulldogs to just 31 points by forcing 23 turnovers and registering 12 steals.

"If we continue to match our offensive output with our aggressive defense, we should be very tough," said Volunteers coach Jerry Arave, noting he’s pleased with the improvement his players have made, especially on the offensive end.

Lee Williams improved to 2-1 after a season-opening loss to Mohave.

“We hadn’t practiced for almost two weeks when we played Mohave and it showed,” said Arave. “But since we’ve been back in the gym, the girls are getting their wind back and our shooting has improved.”

The Lady Volunteers next face Coconino at home on Thursday, Feb. 4 at 5:30 p.m.

The Tigers improved to 3-2 on the season with the wins. They’ll return to action at 7 p.m. on Wednesday, Feb. 3 at Phoenix Country Day School.

The Volunteers slipped to 2-2 with the loss, and return to action Friday, Feb. 5 at home against Bradshaw Mountain.

Kingman Academy wins 2 in a row

PARKER – The Kingman Academy girls basketball team improved to 3-2 for the season with a pair of wins last week.

The Bulldogs play at Wickenburg on Tuesday, Feb. 2 at 7 p.m.

The Volunteers host Flagstaff at 6 p.m. on Monday, Feb. 1.