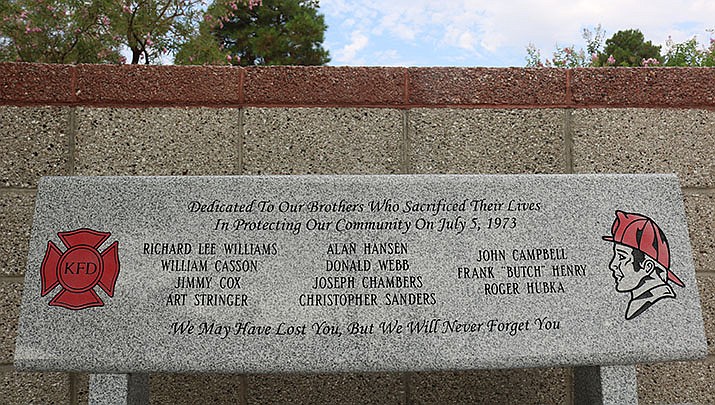 This tribute at Firefighters Memorial Park is just one of the memorials to the 11 volunteer firefighters who died in a propane explosion in Kingman on July 5, 1973. (Photo by Travis Rains/Kingman Miner)

Many years have passed. The once sleepy desert town of Kingman has grown four-fold. But it has not forgotten the day 48 years ago when a railroad tank car filled with propane exploded, raining fire and death.

Of the 13 dead, 11 were volunteer Kingman firefighters, who had set up attack lines and were attempting to cool the burning tank car, prevent an explosion, and protect the community. At the time, it was the deadliest disaster ever experienced by an Arizona firefighting unit.

There is no formal observance planned this year for the day the Doxol explosion rocked Kingman, and the lives that it claimed. That oversight should not be repeated, especially on July 5, 2023, the 50th anniversary of the disaster.

Make no mistake, the tributes over the years have been many, and the heroism has not been forgotten.

There’s the park – Firemen’s Memorial Park – and its touching memorial, which features plaques commemorating the service of each of the deceased. It was constructed in 2010 and has been lovingly maintained, a tribute to those who gave all.

Their stories also live on in the online archives of the Kingman Miner. If you google Doxol on kdminer.com, you’ll find dozens of stories about the disaster dating back to the 1990s. And you’ll see numerous obituaries that show how the disaster impacted the lives of the survivors.

If you’re looking for a silver lining, there are several.

The Doxol explosion, named after the company where the propane was being offloaded into company tanks for distribution, changed the way firefighters respond to propane fires.

Also, according to Miner file stories, it is credited with sparking the creation of the Arizona state fire school.

Additionally, the fact that dozens of onlookers watching from several hundred yards away were seriously burned when the tank car exploded, stands as testament to the need to evacuate the area when similar fires occured.

That doesn’t lessen the tragedy. But it’s nice to know that these valiant men did not die in vain.