$1.5M worth of cocaine seized on Interstate 40 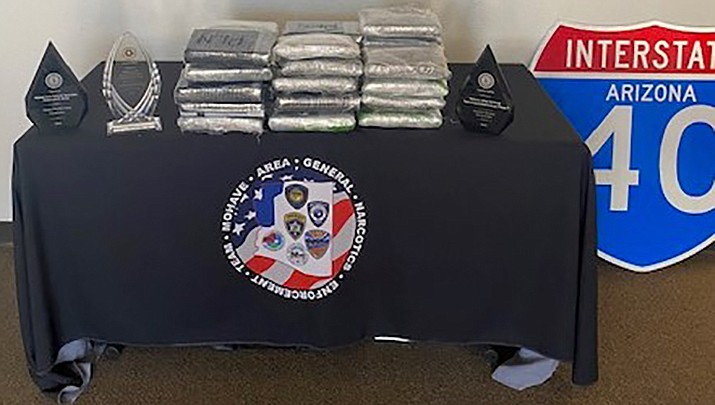 This is what $1.5 million worth of cocaine looks like. The suspected illegal drugs were taken off the highway by a Mohave Area General Narcotics Enforcement Team traffic stop. (Courtesy photo)

KINGMAN – The Mohave Area General Narcotics Enforcement Team reportedly located a suitcase full of more than 74 pounds of cocaine with an estimated street value of $1.5 million during a traffic stop conducted near midnight Friday, July 2.

MAGNET wrote in a news release that the traffic stop resulted in the arrests of Satnam Singh, 31, of Fontana, California, and Carlos M. Leonor, 34, of New Jersey, on suspicion of transportation of dangerous drugs for sale.

On Friday, MAGNET detectives and special agents with the U.S. Drug Enforcement Agency assisted officers of the Arizona Department of Transportation K-9 division with a traffic stop on Interstate 40 at milepost 43.

During the traffic stop, the ADOT K-9 alerted to an odor of narcotic drugs, according to law enforcement. A search of the vehicle was conducted where a suitcase containing more than 74 pounds of suspected cocaine wrapped in bundles was reportedly located. Law enforcement wrote that the substance was later confirmed to be cocaine with an estimated street value of $1.5 million.

Singh and Leonor were booked into the Mohave County Adult Detention Facility.