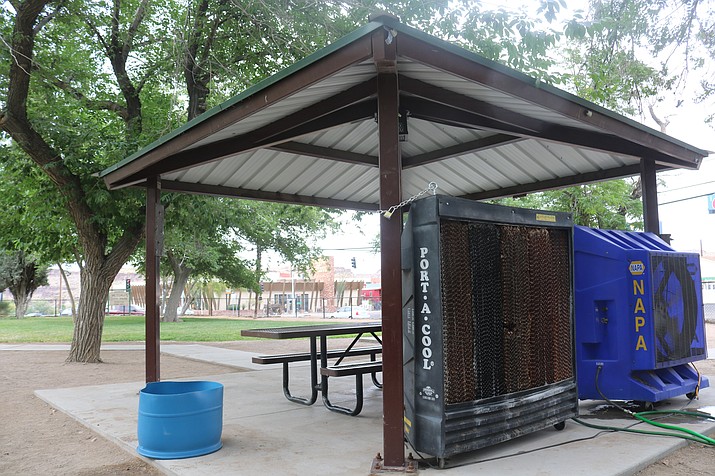 The City of Kingman will erect cooling stations, like the one shown in the above file photo, after the National Weather Service issued an Excessive Heat Watch for the Kingman area from 8 a.m. Wednesday, July 7 to 8 p.m. Monday, July 12. (Miner file photo)

KINGMAN – The National Weather Service in Las Vegas has issued an Excessive Heat Watch for the Kingman area from 8 a.m. Wednesday, July 7 through 8 p.m. Monday, July 12, as temperatures are once again forecast to soar well past 100 degrees, reaching 109 degrees by Saturday, July 10.

Wednesday has a forecast high near 106 degrees paired with wind gusts as high as 21 mph. Later that night the temperature will drop to 79, with gusts increasing to as high as 23 mph.

Conditions will be cooler, if only slightly, on Thursday, July 8 with an anticipated high of 103 degrees.

Winds will gust to 25 mph during the day, but not at all Thursday night, which has a forecast low near 80 degrees.

Friday, July 9 will have a high near 104 and a low near 80 degrees. It is also forecast to be cooler than all the remaining days included in the heat watch.

The temperature will skyrocket on Saturday, July 10 to a high near 109 degrees that will be paired with an absence of wind. There is also no wind in the forecast for Sunday, July 11, which will have a high near 106 degrees. Both Saturday and Sunday have forecast lows of 80 degrees.

The heat watch is scheduled to end at 8 p.m. Monday, July 11, which has a forecast high near 105 degrees.

The City of Kingman has announced that it will install cooling stations from 11 a.m. to 6 p.m. Wednesday through Saturday at Ramada 1 on the Burbank Street side of Centennial Park, 3333 Harrison St.; at Metcalfe Park, 315 W. Beale St.; and at Ramada 1 at Lewis Kingman Park, 2201 E. Andy Devine Ave.