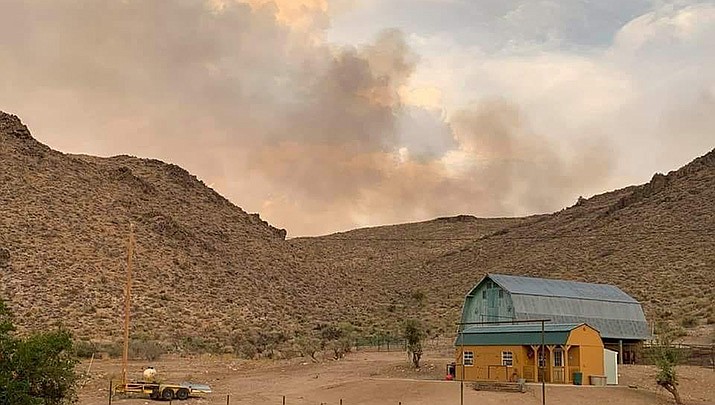 The Elements Fire in the Cerbat Mountains had burned 1,300 acres as of the morning of Tuesday, July 13. (Courtesy photo)

KINGMAN – The Elements Fire in the Cerbat Mountains approximately 6 miles east of Chloride is now reported at 1,300 acres, with a lack of significant moisture and erratic winds from area thunderstorms contributing to its growth.

The fire was discovered on Sunday, July 11 and resulted from area thunderstorms the day before, according to InciWeb, a national fire information system.

“The fire is in rough and rugged terrain with very limited access by resources on the ground,” the Bureau of Land Management wrote on InciWeb. “The gusty and erratic winds from area thunderstorms, which have not provided significant moisture, have contributed to the fire's rapid growth.”

Firefighters performed structure protection on a ranch house and property on the northeast side of the fire Monday night in Cedar Canyon, the BLM reported.

“Today (Tuesday) firefighters are focusing on structure protection on homes located in the Vock Canyon area on the south side of the fire, which is currently in a ‘SET’ status to be alert and prepared for the potential to evacuate if necessary,” the agency continued.

Fire crews were set to work through Tuesday evening to minimize further spread.