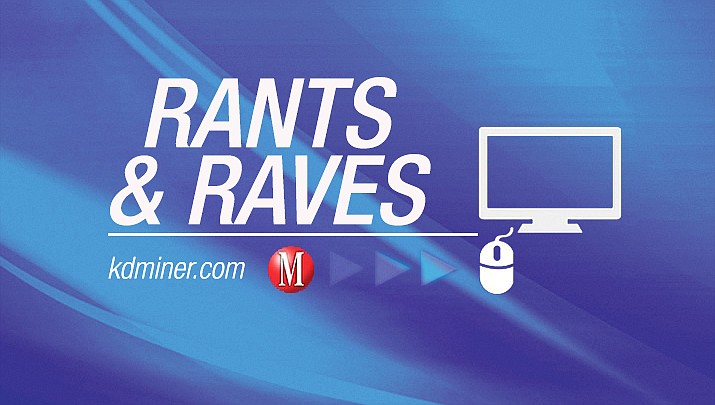 Let us know what’s on your mind in 40 words or less. Submit Rants and Raves at kdminer.com/rants-and-raves or email editorial@kdminer.com. If your rant/rave is about a specific story please mention the headline. Rants and raves must be original; not plagiarized. We receive many more rants and raves than we can print. Local rants and raves are preferred.

Mohave County making plans for spending $41 million of COVID relief money – Anyone remember Mohave County Supervisor Ron Gould publicly saying “with shekels come shackles” regarding federal money? I sure do. It’s in the public record. How can he now be entrusted to make decisions allocating these funds? Utter hypocrisy!

Mohave County records 103 additional COVID cases and 3 deaths – This rise in cases and deaths is totally preventable by the vaccines. What a tragedy that people are willing to sacrifice their health and lives, and the health and lives of others, at the altar of partisanship and unfounded extremist ideologies. COVID wins.

Arizona Game and Fish Commission Chairman Kurt R. Davis column: Biden’s plan to protect 30% of U.S. lands and water lacks specificity – Lacks specificity? As opposed to no plans to protect water and lands? I trust President Biden, not those in the pockets of big corporations seeking to empower themselves at the expense of our very existence.

Gosar discusses riot at Capitol with Republican club – Gosar is rewarded by Republican club for his part in inciting insurrection and violence. He supported the riot, and now attempts to deny the severity and unlawfulness of it. How low can Republicans sink for partisanship and power?

Gosar discusses riot at Capitol with Republican club – What planet is Gosar living on if he thinks the Jan. 6 riots were peaceful protests? So why did he run away from them like a coward?

Gosar discusses riot at Capitol with Republican club – Come on Miner, using Politifacts as a source in a story? There are very few facts published in Politifacts. What a shame that we do not know the truth anymore. With the misinformation printed it is hard to decipher anything as true anymore.

Gosar discusses riot at Capitol with Republican club – I am infuriated that a newspaper I pay for provides Paul Gosar free political coverage that includes arguable lies and propaganda. It is bad enough that the GOP gets free coverage. I feel that community members should support the local newspaper, but much more of this and I cancel my subscription.

How many DPS officers are assigned to the Kingman office? I regularly drive to the VA hospital in Las Vegas and clinic in Laughlin. I can’t remember the last time I’ve seen a DPS cruiser north of Pearce Ferry Road on either direction of the Highway 93 drag strip. But I sure see remains of crashes out out there.

Vaccination resistance? Why? President Trump chose to get vaccinated to protect himself.

Biden taps former GOP Senator Jeff Flake as ambassador to Turkey – That’s a great place for Flake to be, in Turkey. Both names fit him soooo well, flake and turkey. May he stay there forever.

Public officials being star attractions for fundraising by local Republicans – I want to hear officials at any forum without being charged a fee. I want to see them speak at both Democratic and Republican functions to make certain they don’t say one thing to one audience and another to another.

Thank you KRMC – Heartfelt thanks to the staff on 2N at Kingman Regional Medical Center. You made a difficult time more bearable. You are all heaven’s angels on Earth.